What is Ebola? And how does it spread? Here's what you need to know 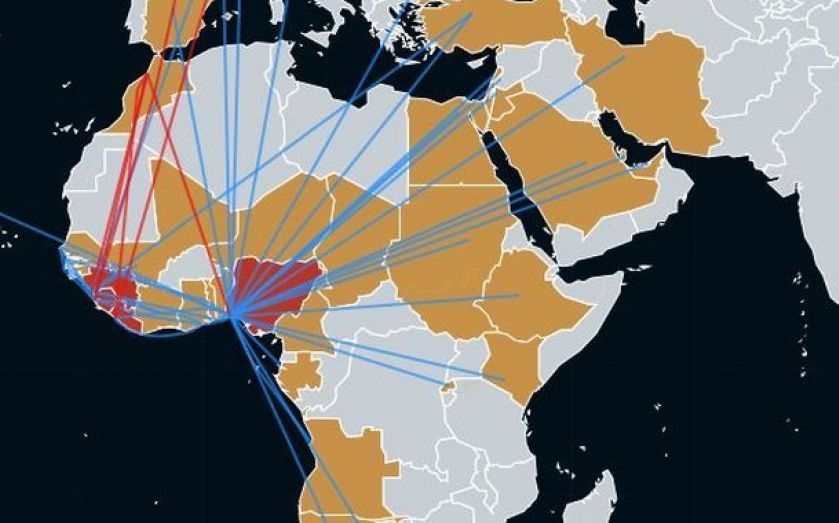 The deadly Ebola virus has been spreading across west Africa at an unprecedented rate this year, leading to what medical experts have described as the worst epidemic of the disease yet.
Yesterday, the World Health Organisation (WHO) announced that 1,013 people have died since this latest outbreak began in February, while the UN reported that as many as 1,848 suspected, probable or confirmed cases have been recorded so far.
The epidemic seems to be gaining momentum, as 52 new deaths and 69 new cases were recorded between 7 and 9 August alone, although the virus is not highly contagious.
This is now the deadliest outbreak of Ebola since the first known appearance of the disease in 1976.
But what is Ebola? How is it transmitted? And what can you do to protect yourself from it?
Origins and transmission
Officially named the Ebola virus disease (EVD), it belongs to the Filoviridae family (filovirus) of viruses. It first appeared in 1976 as two simultaneous outbreaks; one in Yambuku, Democratic Republic of Congo, and one in Nzara, Sudan.
Every time an epidemic starts, it is because a human has caught the virus from a wild animal through infected bodily fluids. Fruit bats are considered to be the natural host of the Ebola virus, and the disease has historically been found in remote villages in central and west Africa, which are close to tropical rainforests where the bats are present.
Once the animal-to-human barrier has been crossed, human-to-human transmission occurs via contact with any infected bodily fluid, in much the same way as the initial animal-to-human transmission.
The time period between contracting the disease and showing symptoms ranges from between two and 21 days.
Symptoms and treatment
It is described by WHO as a “severe, acute viral illness”, with initial symptoms including a sudden onset of fever, intense weakness, muscle pain, headache and a sore throat.
This tends to be followed by vomiting, diarrhoea, rash, impaired kidney and liver function, and in some cases, both internal and external bleeding.
There is currently no cure for Ebola and no vaccine to protect against the virus, although a number are currently being developed.
As a result, the chances of survival are relatively slim once a person has been infected, with a death rate of between 60 and 90 per cent. But if a case of the disease is caught early enough and the sufferer receives treatment immediately in the form of intense supportive care, this significantly reduces the chance of death. Patients are frequently dehydrated and require oral rehydration with solutions containing electrolytes or intravenous fluids.
Although causing many more deaths in total, this epidemic has actually resulted in a slightly lower death rate than most previous epidemics. But fear has nonetheless been fomented by the risk of Ebola spreading beyond the four west African countries – Guinea, Liberia, Sierra Leona and Nigeria – it currently affects .
Last week, a man in Saudi Arabia died from a suspected case of Ebola after visiting the infected region on a work trip.
“The scale of the Ebola outbreak, and the persistent threat it poses, requires WHO and Guinea, Liberia and Sierra Leone to take the response to a new level, and this will require increased resources, in-country medical expertise, regional preparedness and coordination,” said WHO director general Margaret Chan at an emergency meeting for the disease recently.
The map below shows a breakdown of the number of confirmed cases and deaths that have occurred so far in each country. It also shows countries in the world that are only one plane flight away from one of the four afflicted countries.
It should be noted, however, that so far no cases of the disease have been contracted outside of West Africa, and any Westerners who have caught the disease have done so after travelling in infected regions.
Both the World Health Organisation and the UK Foreign Office have advised against travel to Guinea, Liberia or Sierra Leone in order to minimise the likelihood of it arriving in Britain, but the chances of the disease starting an epidemic here are in fact extremely low.
As foreign secretary Philip Hammond pointed out at an emergency Cobra (Cabinet Office Briefing Room A) meeting last month: "In terms of the UK, the issue is about the possibility of somebody who has contracted the disease in West Africa getting sick here. It is not about the disease spreading in the UK because we have frankly different standards of infection control procedures that would make that most unlikely."
Share
Tags: Ebola