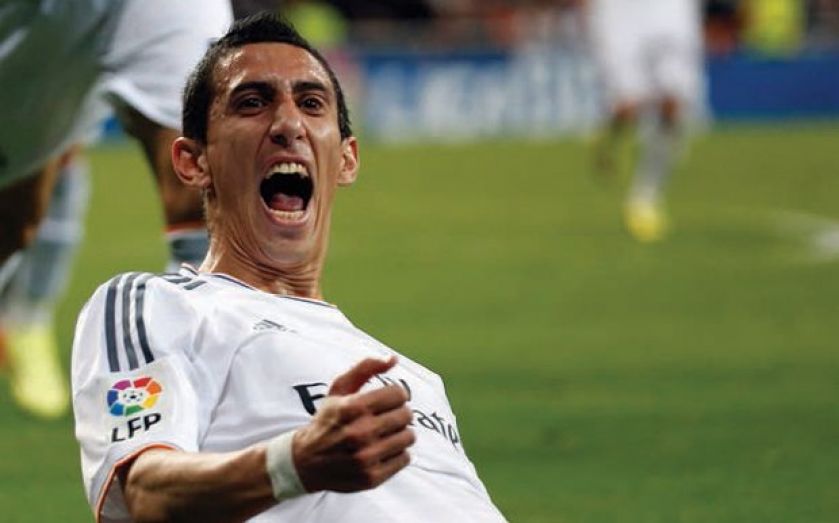 MANCHESTER UNITED were last night attempting to finalise the British record signing of Argentina winger Angel di Maria in a deal that would take the club’s summer spending close to the £140m mark.

The Old Trafford side are believed to have agreed a fee of £59.7m with European champions Real Madrid, with United keen to conclude the transfer in time for Di Maria to make his debut in Saturday’s Premier League clash at Burnley.

Di Maria has 52 caps for his country and played his part as Argentina progressed to the World Cup final against Germany in July, scoring the winner in the last-16 clash with Switzerland before suffering injury in the quarter-final against Belgium and missing the remainder of the tournament

He also made a positive impact at Real after arriving from Benfica in 2010, trailing only compatriot Lionel Messi in terms of assists over the past four seasons, while scoring 36 goals in 190 appearances.

When United take to the pitch at Turf Moor at the weekend, Louis van Gaal could have the fifth most expensive player in world football at his disposal, breaking the monopoly of Spanish giants Real and Barcelona on the top five.

It took in excess of £80m to lure Bernabeu stars Gareth Bale and Cristiano Ronaldo to the Spanish capital and £63m to sign Colombia World Cup star James Rodriguez, while Barcelona had to splash out £75m to capture Liverpool forward Luis Suarez.

The signing of Di Maria will be the fifth time United have broken the record transfer fee paid in a deal involving a British club, with the 26-year-old following in the footsteps of Rio Ferdinand, Juan Sebastian Veron, Andy Cole, Bryan Robson and Scotland striker Denis Law.

Di Maria’s arrival will push United’s expenditure beyond £200m since the departure of Sir Alex Ferguson but is unlikely to represent the end to Van Gaal’s summer spending spree by the time the transfer window shuts on Monday.

United, who have one point from their opening two league games following Sunday’s draw at Sunderland, have also been linked with a move for AC Milan’s ex-Manchester City midfielder Nigel de Jong and Ajax’s Daley Blind.