THE NUMBER of people without jobs who are looking for work fell by 57,000 between March and May, against the previous three months, the Office for National Statistics (ONS) revealed yesterday. 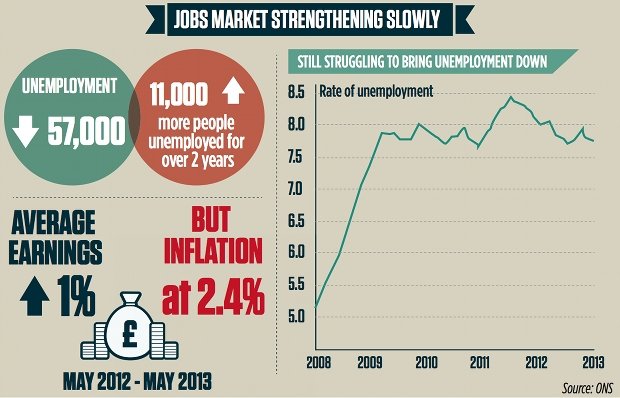 The unemployment rate fell to 7.8 per cent, in comparison to eight per cent for December 2012 to February this year. The total number of people unemployed in the UK is 2.52m.

In London unemployment fell notably compared to the previous three months, down 16,000 to a total of 368,000. The jobless rate in the capital stands at 8.6 per cent nonetheless, above the UK average.

“A stronger pace of job creation would be necessary to deliver a significant fall in the UK unemployment rate,” said Barclays’ Blerina Urici, adding that there is “limited scope for the rate to fall considerably”.

The number of people who are classed as economically inactive, not in work or looking for work, rose by 87,000 in the same period up to May. The rate of employment stood at 71.4 per cent, up by only 0.1 per cent from earlier in the year, but down on 12 months earlier.

Yesterday, the Organisation for Economic Co-operation and Development’s employment outlook lauded the UK and other countries, which passed labour market reforms in the 1990s, suggesting that such action had allowed them to more successfully limit unemployment since the financial crisis.