UK Investors expect an average annual return of 8.7 percent on their investments over the next five years, according to a major study.

The Schroders Global Investor Study (GIS) 2017 found 58 percent of UK investors expected to make an average return of up to 10% over the next five years. Just under a third (31 percent) expected a minimum of 10 percent a year.

UK millennials, those born in the Eighties and Nineties, were even more optimistic. Nearly half (43 percent) expected a minimum return of 10 percent a year, including almost a quarter (23 percent) who expected more than 15 percent.

The study, which surveyed 22,100 people who invest, from 30 countries, found annual return expectations in the UK were in line with Europe overall – also at 8.7 percent – but less than the global average expectation of 10.2 percent. [See expectations for all countries]

The expectations expressed were for a broad portfolio of investments.

Are investors expecting too much?

For equities, historic performance has been lower than the expectations expressed in the study.

For example, world stock markets have provided average annual returns, with dividend income reinvested, of 7.2 percent over the last three decades, as measured by the MSCI World index.

The chart below shows how the two compare, and also highlights other key figures for investors to consider. 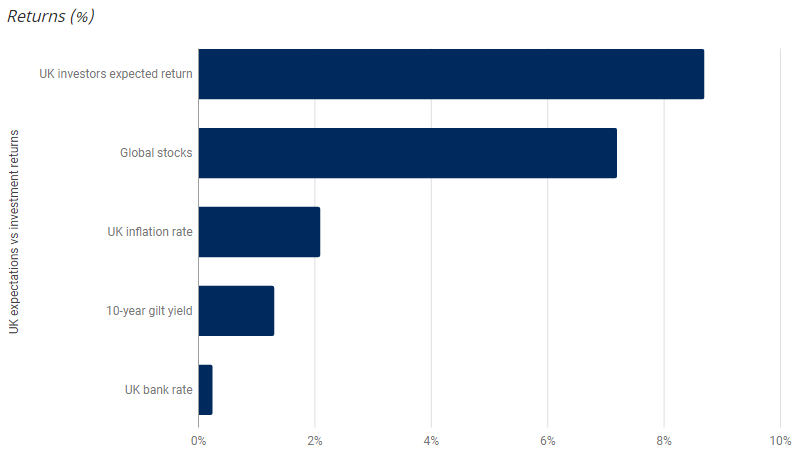 Source: Schroders Global Investor Study 2017, Thomson Reuters Datastream and the Bank of England. Global stocks is the annual total return MSCI World Index between 1987 and 2017. UK inflation is based on the Consumer Price Index averaged out over the last five years. 10-year gilt yield and UK interest rate are current as at 20 October 2017. Past performance is not a guide to future performance and may not be repeated.

Investors should also remember that past performance is no guide to future returns, which could be more modest.

The Schroders Economics Group has forecast a 5.4 percent annual return for UK equities over the next seven years, or 2.4 percent a year after inflation is taken into account.

A survey of professional investors – the Schroders Institutional Investor Study – also reflected lower expectations of returns, at 5 percent a year for the next five years.

"The UK stock market has seen a remarkable rally in recent years, which has probably buoyed confidence. But much of the strong performance is due to the extreme actions taken by central banks to stimulate the economy.

"The broader picture is that we’re in an age of low rates and low growth. It’s therefore wise to expect lower returns."

Equities are considered to be higher risk investments given how prices can fluctuate. Riskier investments tend to offer the potential of higher returns. However, the 2017 Global Investor Study also found that UK investors are currently averse to taking too much risk due to the uncertainty caused by international events.

Schroders’ James Rainbow added: “Despite exceptionally low rates, many savers and investors continue to turn to the safety of deposit accounts when they feel nervous about political events.

"This ignores the evidence that suggests your money works harder when invested over long periods. Stock market investments tend to pay dividends which can be reinvested. When this happens, returns are compounded and end up much higher than most people would expect."

The Schroders Global Investor Study, which surveyed people planning to invest at least €10,000 (or the local currency equivalent) in the next 12 months and who have made changes to their investments within the last 10 years, covers a whole range of investor attitudes and expectations which can be found at schroders.com/gis.

It sits alongside Schroders InvestIQ, a new test that aims to improve the abilities of investors.

What is the investIQ test?

At the heart of investIQ is a short test developed by behavioural scientists that helps you understand your investment personality. In less than eight minutes, you’ll get a detailed report outlining which behavioural traits influence you the most, and how best to deal with them.