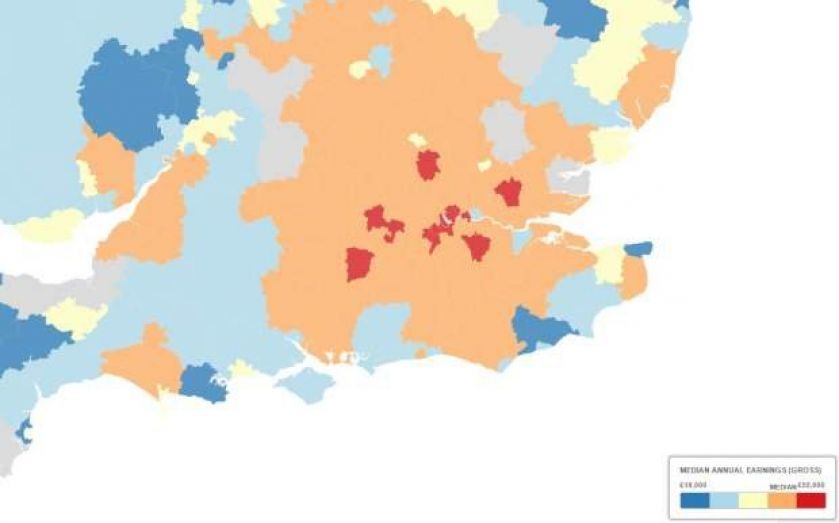 Where do the UK’s richest people live? And how rich is your local area? New data from the Office of National Statistics has revealed the areas where Britain’s wealthiest reside. Predictably, not one of is outside the south east of England.

According to the ONS, median gross annual earnings increased between 2013 and 2014 by just 0.9 per cent in the UK, but that wasn’t evenly spread. In some areas, residents' average wages decreased, meaning for them, the cost of living crisis is intensifying.

Unsurprisingly perhaps, eight of the 10 richest local authorities in the UK were in London, including each of the top four.

Here is a map showing the areas with the highest median gross annual earnings. Shades of blue are far below the national average of £22,044, while light yellow is between £21,000 and the average. Oranges and reds indicate areas above the median.

To scroll past the map on mobile, swipe down on the right-hand side of the visualisation.

As we can see, all of the top 10 are in the south east of the country. Here they are, charted: 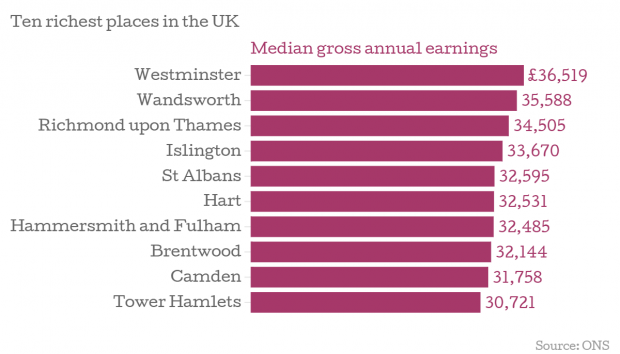 The list looks a bit different if we strip out the London contingent, but this altered top 10 is still confined to the south east.

What's more, the majority of the biggest increases are also from the south of England, if not the south east.

Tandridge tops the list, with residents’ annual median gross incomes having increased by 15 per cent in a year. Although this is a median measure, meaning it is the point at which 50 per cent of the sample is above and 50 per cent below – so in a small, rural authority a few job promotions or demotions could alter the figure.

What you need to know about the data

All data used is from the Office of National Statistics. We chose to use median values as they go some way to mitigating the effect of very high or low outliers. Any grey areas are omitted because the ONS deme the data to be too revealing or too unreliable.