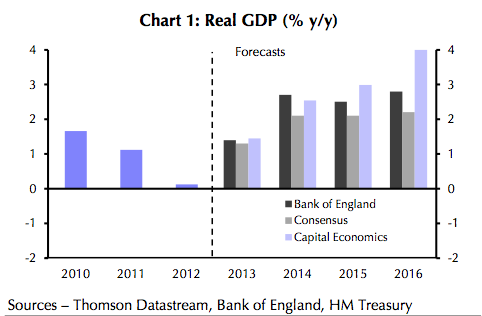 Capital economics have revised up their growth forecast for the UK in their latest UK quarterly review. Although the economic recovery still faces many challenges including the need for continued fiscal restraint, growth is expected to be higher than previous estimates.

The firm has revised its forecast for 2013 as a whole up from 1.2 per cent to 1.5 per cent. Growth of 0.7 per cent in Q3 matching Q2 has led to the firm concluding previous estimates now look overly pessimistic.

It has also upped its growth forecast for next year from two per cent to 2.5 per cent with growth accelerating further to three per cent in 2015.

Capital economics does not believe that the increased growth will prevent inflation falling to its target rate in the coming months and continues to expect that interest rates will remain at their current levels for several years. They cite increasing productivity as one of the reasons for the increasingly optimistic growth projections.

An interest rate rise is still a long way off, a resumption of quantitative easing now looks unlikely. The MPC’s appetite for more asset purchases has clearly cooled, with even arch-dove David Miles altering his view. More QE would probably come back onto the agenda if the economic recovery slowed sharply and/or the recent rise in interest rate expectations prompted big rises in private sector borrowing rates. But for now, we are assuming that the programme remains at £375bn for the foreseeable future.

Unemployment is expected to fall slowly, with the unemployment rate falling below seven per cent only in the years 2016 or 2017. If the Bank of England remains wedded to its current policy of forward guidance, interest rates may remain as record lows for the next three to four years.