Trevor Steven: My manager and players of the year from a vintage Premier League season 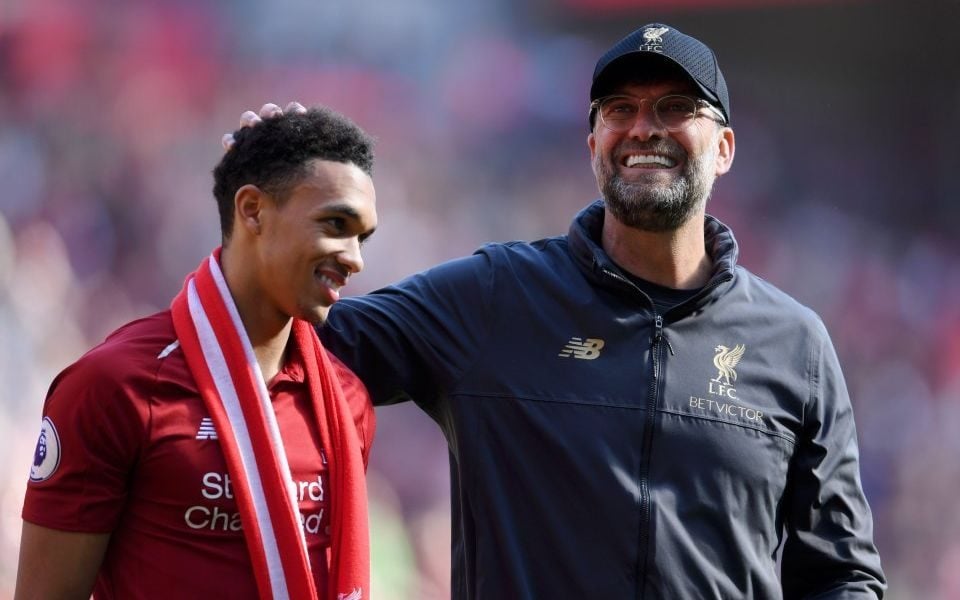 Manchester City are champions again but they will never win a tougher Premier League title than this year’s.

They and Liverpool have played at such a high level for the duration of the top-flight campaign that I can’t imagine we’ll see anything like it again for a long while.

That is reflected in my choices for best manager, goalkeeper, defender, midfielder and forward of this league season. All are from the top two teams, but there has simply been nothing to match them.

As an Evertonian this is difficult, and Pep Guardiola is obviously tremendous too, but for a number of reasons I have to say Jurgen Klopp.

City separated themselves from the rest of the division in 2017-18 but this year Klopp has steered Liverpool to that level, turning a 25-point gap into just one point.

Read more: Man City hold off Liverpool and prove they're best of the best

I do admire Klopp for his character, openness and contagious enthusiasm. As a player, you’d love to play for him, and while that is also true of Guardiola, he isn’t quite as buddyish.

Liverpool’s improvement is a continuation of Klopp’s development of the team. He has also been instrumental in the flourishing of Trent Alexander-Arnold and Andy Robertson and deserves credit for that.

Alisson and Ederson are both of the highest quality, even if they have had outstanding defences in front of them, but for his adaptation to a new environment I’m favouring the former.

Alisson has been a hit in his first season on Merseyside (Source: Getty)

He was under pressure initially due to his £67m price tag but I can’t think of any costly errors that he made and he has proven to be the rock that Liverpool needed.

The relationship and trust between a keeper and his defenders is a vital component in any strong side and Alisson has been money well spent.

Virgil van Dijk has unbelievable quality and is an obvious candidate but on the basis of how far he has come since last summer I’d go with Alexander-Arnold.

He takes free-kicks and corners, gets forward and defends tremendously. He has adapted to all the demands placed on a modern full-back and is doing it in the full glare of the world’s biggest league.

Van Dijk has been playing at his current level for a few seasons now. His Liverpool team-mate, meanwhile, has established himself as No1 choice at right-back aged just 20 and that’s worth of recognition.

He may not have played much in the last few weeks but this has been Fernandinho’s best season in English football and has underlined his importance to City.

Fernandinho has been a cornerstone of City's title defence (Source: Getty)

The Brazilian has phenomenal quality all around him but he is the cornerstone of the team and a key factor in Guardiola’s side defending their league title.

He’s a mature holding midfielder who reads the game so well and can also weigh in with a goal. He does everything to a high standard, keeps City ticking over and allows others to play.

Another man who has been crucial to the consistency that saw City rack up 98 points is Raheem Sterling.

He has chipped in with 17 goals and 10 assists in the league alone and been absolutely influential in some of the biggest games.

Sterling weighed in with 19 goals and 10 assists in the league this season (Source: Getty)

Sterling has also taken his game to a new level this year and that’s what I’m looking for in my choices.

His finishing is a case in point. A bad miss used to affect him for two or three matches but now he’ll put it behind him and score in the same game, and that shows a strength of character that you have to admire.

Two players who were written off long ago and deserve special praise for their contributions are James Milner and Vincent Kompany.

Milner still runs more than anyone while Kompany, also 33, has come through various injury battles without losing faith in himself or his ability.

Both bring huge amounts of leadership to Liverpool and City respectively and, in different ways, have matched that with some monumental contributions on the pitch.