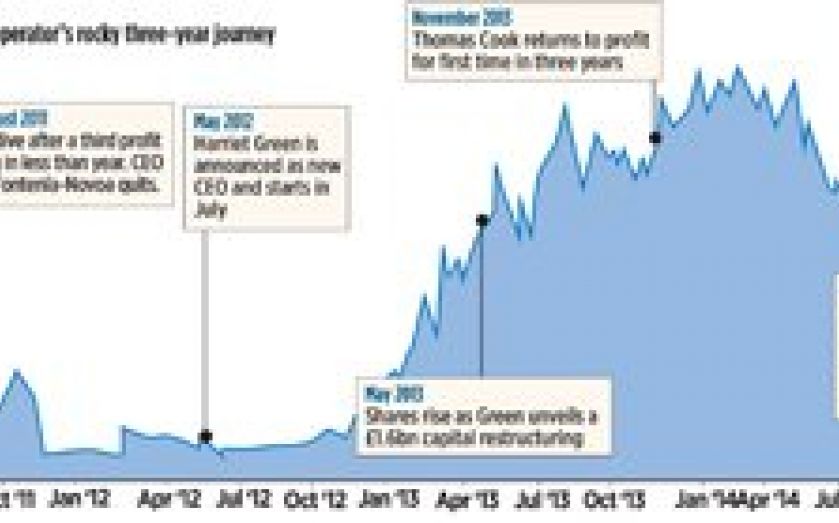 Shares plunged as much as 20 per cent yesterday in reaction to the news and a warning by the company that tougher market conditions lay ahead in the coming year.

Green, an industry outsider who joined Thomas Cook in 2012 after a nine-month search for a new boss, has been replaced by chief operating officer Peter Fankhauser with immediate effect.

Chairman Frank Meysman denied there had been a falling out, saying the first phase of the turnaround, with which Green had been tasked, had been achieved more quickly than expected.

“We now move to a new phase where the implementation of that strategy is becoming the more important part, and we feel it is time to move to somebody who has been groomed as a chief executive who comes from the industry.” he said, adding that Fankhauser had been lined up as a successor.

The Swiss-born leisure industry veteran has worked for Thomas Cook for 13 years and was put in charge of Thomas Cook’s UK business in November 2012, as well as head of continental Europe.

Green hinted yesterday that she might have another job in her sights: “I always said that I would move on to another company with fresh challenges once my work was complete. That time is now.”

HARRIET GREEN’S THOUGHTS ON BEING AT THE TOP

I always said that I would move on to another company with fresh challenges once my work was complete. That time is now.
26 NOVEMBER 2014

You can’t do a transformation on this sort of scale in a year or two years. I usually say it’s about six years… We go to the City next week with our second year of results and to show how the company has become fitter and better and we’re absolutely not done.
20 NOVEMBER 2014

If you are doing a sustainable transformation of a business of this scale you are going to have to work very hard, very long hours. You are going to probably be in quite good shape… You need to be really resilient, so you’d better be healthy, have a good regime. This is a tough course.
THE TIMES, OCTOBER 2014

When I took the role at Thomas Cook, I wasn’t headhunted — no one approached me. I contacted the chairman and said: ‘I think you need me’.
JUNE 2013