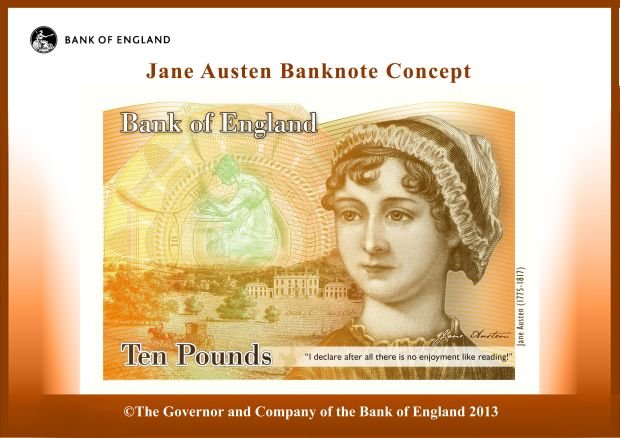 The Bank of England has confirmed that Jane Austen will feature on the next £10 note, due to be introduced in 2016. She replaces Charles Darwin.

We'll be waiting just under a year for a (non-Royal) woman on our cash, as Sir Winston Churchill replaces Elizabeth Fry on the £5 issue.

The image of Austen comes from a portrait commissioned by James Edward Austen Leigh (Jane Austen’s nephew) in 1870, and adapted from an original sketch of Jane Austen drawn by her sister, Cassandra Austen.

Newly minted notes will feature the quote “I declare after all there is no enjoyment like reading!” from Pride and Prejudice (Miss Bingley, Chapter XI).

Jane Austen certainly merits a place in the select group of historical figures to appear on our banknotes.  Her novels have an enduring and universal appeal and she is recognised as one of the greatest writers in English literature.

As Austen joins Adam Smith, Boulton and Watt, and in future, Churchill, our notes will celebrate a diverse range of individuals who have contributed in a wide range of fields.

City A.M.'s managing editor, Marc Sidwell, has written that Jane Austen is a fitting choice; she should be celebrated not just for her writing, but also her grasp of economics:

Austen may not be Adam Smith, but her penetrating record of the human condition reveals truths even in this domain. Standing back from the stories, we find hard economic choices driving and shaping her plots, from the intricacies of inheritance to the material consequences of marriage or misalliance. The hard money of Austen’s day gives us a very different economic landscape, before inflation and taxation assisted what John Maynard Keynes called “the euthanasia of the rentier”. But it still illuminates timeless principles of human action.

Take, for example, game theory. It may be an essential tool of today’s economist, but Austen is still waiting for due recognition of her pioneering work in this field, with its emphasis on strategic calculation and individual choice. Don’t take my word for it – read Michael Chwe’s book Jane Austen: Game Theorist, which shows she was a century ahead of her peers.

We should have expected nothing less. Austen’s novels are concerned with a market of great consequence for her heroines – the marriage market – a fiercely competitive, cutthroat setting, perfect for the acute observation of patterns of strategic thinking, from the impact of visiting Pemberley on Elizabeth Bennet’s affections to the errors of planning at the heart of Austen’s supreme achievement, Emma.