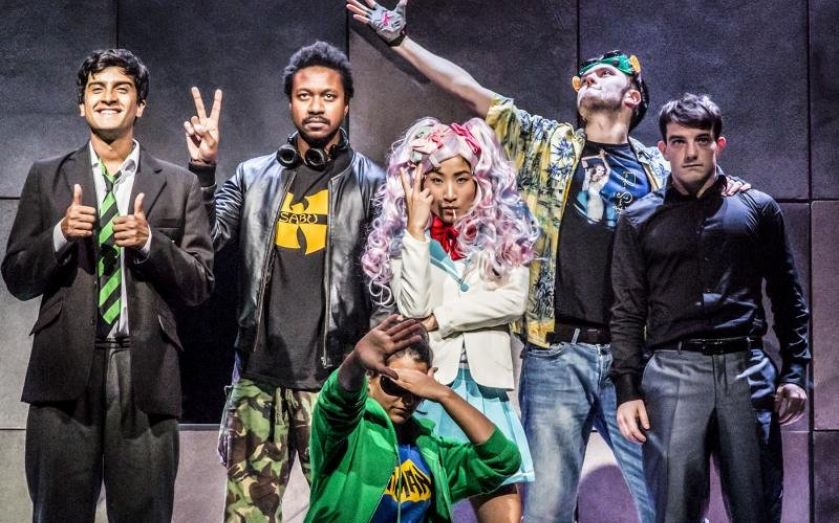 IT’S HARD to know what the greying grandees of London theatre criticism would have made of Teh Internet is Serious Business, a play that revels in an online world of memes and trolls, cheeseburger-demanding cats, socially awkward penguins and condescending Willy Wonkas.

But what appears as incomprehensible nonsense to most, makes perfect sense to a select few. Topiary and Tflow are the online aliases of two real-life hacktivists, Jake Davis and Mustafa Al-Bassam, both of whom were arrested in 2011 following a series of high-profile attacks on corporations and governments. Teh Internet is Serious Business tells their journey from lonely under-stimulated teens to CIA most-wanted lists.

The first half is a live reenactment of a forum discussion between elite hackers (including Tflow and Topiary) on 4chan, that dark corner of the internet where infantile stupidity parties till the wee hours with nerdy super-intelligence. In 4chan, the only rule is a puritanically enforced anarchy. Users are devoted to an amoral mickey-taking that takes no prisoners – one moment they’re trolling a dead girl’s Facebook memorial page, the next they’re mocking the Westboro Baptist Church for being bigots. All in pursuit of lulz (like LOLs, as in “laugh out loud”).

When the hackers realise it’s more fun targeting corporations and despotic regimes, their mischief acquires a political edge. Lulzsec and Anonymous are formed and soon enough, the law comes a-knocking.

Many of today’s writers seem to see a kind of impenetrable chaos when they look at the internet. As a result, they don't even try to understand it, and instead content themselves with merely reflecting its energy. Writer Tim Price fills the script with surreal jokes, incarnate memes, set pieces, songs and digressional anecdotes. There's a ball pit (a playground that can swallow you whole; a nice metaphor for the internet, I’ll give him that) and the stage is dotted with trap doors out of which people in animal costumes are liable to pop.

This is certainly one side of the web, but for the people at the heart of Lulzsec and Anonymous, the net isn’t chaotic or silly. It’s a structured, navigable world in which they – lonely and isolated people – can be protagonists.

The emotional lives of the hackers are dealt with crudely by Price, who, in order to indicate the “real life” scenes (i.e. ones not set in the chat room) places a flashing “offline” sign above the stage. Topiary’s mum talks to him about dead stepfathers and school crisis meetings in scenes that function as signposts for the characters’ emotional dysfunction.

But while the online and offline worlds are shown side by side, there isn’t enough exploration of how they intersect. Why do these boys thrive in this environment? What is it about the dark web that makes it such an attractive refuge for this particular kind of person?

Price also fails to adequately distinguish hacktivists from activists. The hackers interact like any offline protest group, the main players furiously squaring up to each other in moments of heightened tension. But hackers are different, and hacking poses its own distinct moral issues, issues which Price doesn’t address, such as the lack of accountability that accompanies anonymity.

Still, it is very funny, in that smart-alec throwaway internet way. It may not get to the heart of the matter but at least there are plenty of lulz.