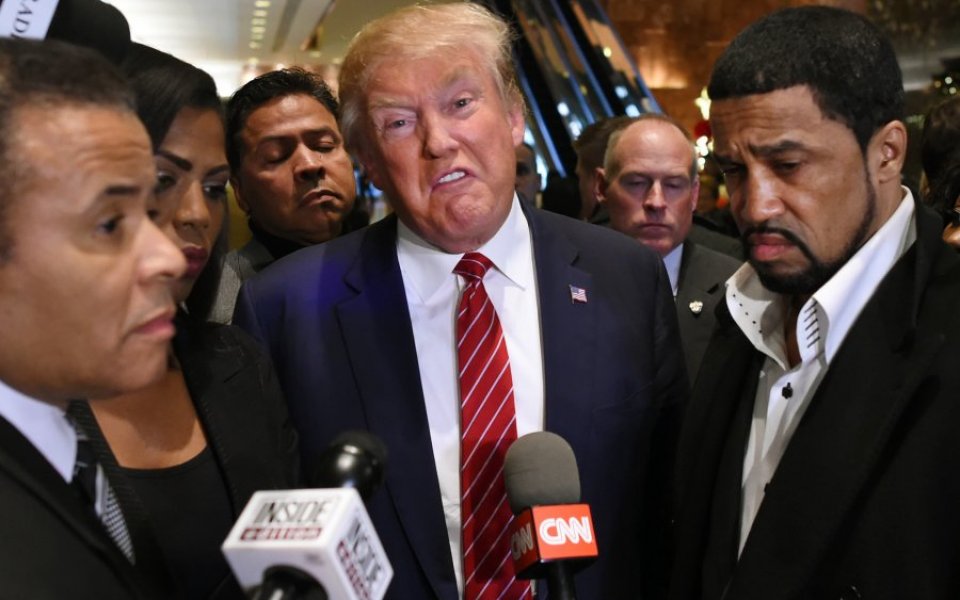 A petition calling for Donald Trump to be banned from the UK has surpassed the amount of signatures it needs to be considered for debate in parliament, after remarks he made this week.

Trump's claim from the Republican Presidential hopeful that police do not go into certain areas of Paris and London because of "radicalisation", as well as his suggestion that all Muslims should be banned from entering the US until "our country's representatives can figure out what is going on" – has now tipped over into the next level.

Here's a rundown of how the world reacted.

What the British public think

Within hours, tens of thousands of people joined a petition to ban Donald Trump from entering the UK.

The government has a commitment to respond to all petitions that get more than 10,000, and any petition that garners over 100,000 signatures will be considered for debate in Parliament. Now, with over 107,000 signatures, that will now be the case.

Another petition has emerged calling for Robert Gordon University in Scotland to revoke an honorary degree awarded to Trump in 2010.

What the UK's leaders think

Across the Atlantic, Prime Minister David Cameron has also criticised Trump for his comments, saying they were "divisive, unhelpful and quite simply wrong".

Crime has been falling steadily both in London and in New York – and the only reason I wouldn't go to some parts of New York is the real risk of meeting Donald Trump.

Trump has even managed to unite the UK's political parties for once.

Labour leader Jeremy Corbyn said: “Trump’s call to ban Muslims from entering the US is an attack on democratic values.”

Nicola Sturgeon, leader of the Scottish National Party, said: "Donald Trump's comments are obnoxious and offensive, and have rightly been condemned by people across the political spectrum, in the United States and elsewhere."

And remarkably the Metropolitan Police responding, stating: "We would not normally dignify such comments with a response, however on this occasion we think it’s important to state to Londoners that Mr Trump could not be more wrong.

"Any candidate for the Presidential election in the United States of America is welcome to receive a briefing from the Met Police on the reality of policing London."

What his party thinks

Trump has single handedly-thrown the Republican party into disarray, drawing criticism from all factions of the party, including former Vice President Dick Cheney and Presidential rivals.

Jeb Bush said: "Donald Trump is unhinged. His 'policy' proposals are not serious", while speaker of the House of Representatives Paul Ryan said Trump’s remarks violated the constitution and were “not who we are as a party”.

Other Republican hopefuls, including New Jersey governor Chris Christie and Senator Marco Rubio were also critical of him.

Read more: Trump goes up in the Republican Presidential nomination polls after each gaffe

And Nihad Awad, executive director and founder of the Council on American-Islamic Relations, said: "Donald Trump sounds more like a leader of a lynch mob than a great nation like ours."

#TrumpFacts Parts of London are so radicalised that this landmark is now being used as a minaret for call to prayer pic.twitter.com/pXTUqsKWfm

I can no longer tweet about Trump. That anyone in America would even CONSIDER voting for this rabid coyote leaves me speechless.

Trump: From Jan 1, Muslims will be charged extra on my golf courses. pic.twitter.com/I70WhCnptM

Britain so radicalised that the Queen now wears a hijab instead of a crown #TrumpFacts @realDonaldTrump Haha pic.twitter.com/PsFn10OcV0

Britain has become so radicalised that even their weird little cars wear burkas #trumpfacts pic.twitter.com/XYhAfmrcBd

The worlds tallest minaret calls the whole nation to prayer in the UK #trumpfacts pic.twitter.com/GvyV6iH6PB

What media now make of Trump

BuzzFeed's editor-in-chief Ben Smith has sent a memo to his staff to say that it is now acceptable for them to call Donald Trump a racist.

"It is, for instance, entirely fair to call him a mendacious racist, as the politics team and others have reported clearly and aggressively: he's out there saying things that are false, and running an overtly anti-Muslim campaign. BuzzFeed News's reporting is rooted in facts, not opinion; these are facts," Smith said.

And Arianna Huffington, co-founder, president, and editor-in-chief of the Huffington Post Media Group has written in the Huffington Post to say that due to Trump's campaign being transformed into an ugly and dangerous force, "we will no longer be covering [Trump's] campaign in Entertainment. But that's not to say we'll be treating it as if it were a normal campaign". She added:

So as we cover his daily campaign, we'll constantly remind the public of what he stands for, citing references and providing links.

We'll not only be covering the ways Trump's campaign is unique in recent American politics, but also the disastrous impact it continues to have on his fellow candidates — and the national conversation.