The story of the world's best beef: How Kobe conquered the globe 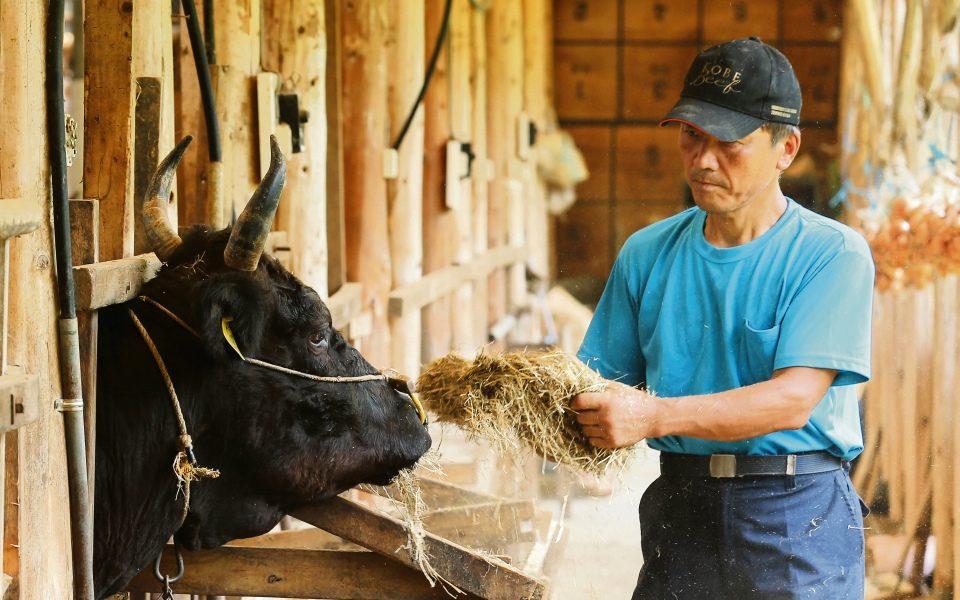 Wedged between the Rokko mountain range and Osaka Bay, Kobe is the sixth largest city in Japan with more than a million and a half people. Its namesake beef doesn’t come from the city itself but from the surrounding farmland of Hyogo Prefecture where Kobe is the capital and the key port.

As the story goes, it was an Englishman visiting the port of Kobe who first had the idea of eating beef from cows raised in Hyogo – or at least was the first person known to have acted on the notion.

He tucked in to his legendary meal back in 1868, when Japan only just had opened up trading with the West. At that time the Japanese diet did not include meat, and cows in Japan were used mostly as draught animals.

Since then, though, Kobe beef has been celebrated as what many believe to be the best in the world, and no local farmer would dare make the area’s prized Tajima cows put in a day of labour to earn their keep.

The Champagne of Steaks

The breed for Kobe beef is the Tajima strain of Japanese Black cattle. Only the meat from Tajima cows that are reared in Hyogo qualify to be certified Kobe beef.

However, simply breeding the right type of cow in the right place does not in itself result in Kobe beef. The meat from these cows then must be scored on its marbling and texture, according to rules set out by the Kobe Beef Marketing and Distribution Promotion Association. Only the best of that lot can be certified.

With respect to scoring, the ideal balance of meat and fat marbled together is called shimofuri. In essence, the greater the shimofuri the higher the score. Ideally the fat should start to dissolve in the mouth, giving way to the flavour of the lean meat. In the case of Kobe, that flavour is sweet and nutty. Often when ordering a steak, there’s a trade off between flavour and texture. With Kobe beef, this shouldn’t be an issue, with the meat a perfect blend of both.

Of the 5,557 head of Kobe beef cattle that went to market in 2018, only 693 were exported. The European Union is the biggest overseas market for Kobe beef, with roughly 1,000kg coming to the UK. Taiwan is the second biggest market, followed by the United States. The vast majority remains in Japan for domestic consumption.

While queuing for croquettes, patrons pass a bronze plaque with the profile of a Tajima cow’s head outside the shop. This plaque indicates proof of membership in the Kobe Beef Marketing & Distribution Promotion Association.

For all the recent talk of veganism and plant-based diets, beef is still big business in Britain. Indeed, eating less meat in general seems to be benefitting some high end steakhouses. M Restaurants – a premium steak restaurant group with outlets in the City, Victoria and Twickenham – has a £165 per person “Wagyu Experience Menu” featuring Kobe beef fillet among its seven courses. The M group also sells Kobe fillet a la carte for £1 per gram.

According to M’s executive chef Michael Reid, his restaurants have seen “no impact whatsoever,” with respect to trends in non-meat dining. Reid suggests there may be more people adhering to a flexitarian approach, but when they exercise their more carnivorous side, they do so at places such as M. “People are probably eating less beef at home, but not so much when they’re dining out. It’s their treat,” says Reid.

In Kobe beef’s prefecture of origin, there’s no indication of waning interest for its most famous food. Indeed it’s all but impossible to stroll through the centre of Kobe without encountering restaurant signage, window displays and advertisements directing carnivores to places where they can eat Kobe beef.

Read more: Why did the US Navy sink its own vessel off the coast of the Cayman Islands?

Perhaps the most visible promotion is at Moriya Shoten, a butchery in the heart of Kobe specialising in selling regional beef. However, Moriya Shoten stands out not so much for the lusciously marbled meat on view in its windows or the brisk cross-counter trade conducted inside, but for the long lines of customers on the street queuing up for an affordable taste of Kobe beef.

From a tiny takeaway window on the side of the shop, Moriya Shoten sells up to 2,000 potato and Kobe beef croquettes a day to an ever-present queue of patient patrons. At a mere ¥90 (roughly 60p) each, the croquettes are worth the wait.

While queuing for croquettes, patrons pass a bronze plaque with the profile of a Tajima cow’s head outside the shop. This plaque indicates proof of membership in the Kobe Beef Marketing & Distribution Promotion Association.

There may not be any official bronze plaque or guarantee of high ranked meat at ‘western style’ restaurant Mon, but the 80-year-old family-run restaurant serves what might be the most tender cutlet sandwich in the world

The more time spent in Kobe, the more these plaques become common landmarks around town. According to Tetsunori Tanimoto, the Head of Kobe Beef Association and President of Livestock Division for Hyogo Prefectural Headquarters National Federation of Agricultural Co-operative, there are plans to roll out the plaques to member businesses around the world that sell authentic Kobe beef.

Another place where it is possible to see one of these plaques is across the street from Moriya Shoten in the food halls of Daimaru Department Store. The lower floor of this upscale retail haven offers a foodie shopping experience similar to Selfridges, with vast displays of freshly made sushi and sashimi, steamed buns, and even well-stocked sections of prepared vegan dishes – and, of course, a broad selection of Kobe beef for takeaway eating or to be cooked at home.

The same plaque sits prominently on view at 110-year-old family-run Kobe beef shop, Tatsuya. Top price fillet and sirloin cuts of the highest ranked Kobe beef are king here, but a range of other products is available; the shop’s owner recommends thin slices for adding to shabu shabu (hot pot). Shoppers also can pick up preserved beef products such as Kobe beef jerky and tsukudani (pickled beef with salt, sugar and ginger).

Of course for most diners, steak remains the preferred way to eat Kobe beef and it’s arguably is the best method for savouring the fullest expression of the meat. A smart spot for having your steak done right – along with a bit of kitchen theatre – is Ishida, a quiet teppanyaki restaurant hidden away on the third floor of a seemingly nondescript commercial building (and another establishment with the aforementioned bronze plaque out front). Kobe beef served here is of the highest ranking (A5/BMS – 12, in case you’re wondering).

There may not be any official bronze plaque or guarantee of high ranked meat at ‘western style’ restaurant Mon, but the 80-year-old family-run restaurant serves what might be the most tender cutlet sandwich in the world. With its dark wood paneling, vintage bric-a-brac behind the bar and tableside condiment trays of grated Parmesan cheese, Tabasco and soy sauce, the scene is an odd but comforting amalgamation of North American and Japanese. It’s a cosy setting to indulge in the restaurant’s signature cutlet sandwich.

With panko-crusted Kobe on slices of fluffy white bread, topped with a layer of tangy house-made sauce (not unlike Worcestershire sauce), it is a super soft and succulent sarnie, yielding with each bite as if the meat had been pureed, tenderised or marinated before being breaded. Not so, promised Mon’s owner. The beef is just that delicate.

A great time to explore the beefier aspects of Japanese cuisine will be during Rugby World Cup 2019, which are on in Japan until early November. Kobe is one of a dozen host cities for the games, with four scheduled matches to be played at Kobe Misaki Stadium, including England v USA on 26 September.

With Kansai International Airport within easy reach of Kobe and Shinkansen bullet trains connecting the city to other destinations in Setouchi (the western “inland sea region” of Japan) as well as the rest of the country, the city makes a fabulous base for the World Cup. For travellers particularly keen to carry on with gastronomic pursuits, consider sister Setouchi city Hiroshima. Japan’s biggest producer of oysters, with izakaya “tapas” bars aplenty, and street treats such okonomiyaki (savoury pancakes) served hot and fast throughout the city, Hiroshima would be ideal to couple with Kobe for a most delicious holiday.

Finnair flies to more destinations in Japan than any other European airline; short connections via Helsinki airport; flying on the Finnair A350 – bright, spacious cabin, wifi connectivity, award winning Nordic hospitality. For details go to flights.finnair.com/en/flights-to-japan

For more about Rugby World Cup 2019 check out tickets.rugbyworldcup.com

For ideas about visiting Kobe and the Setouchi region have a look at setouchitrip.com