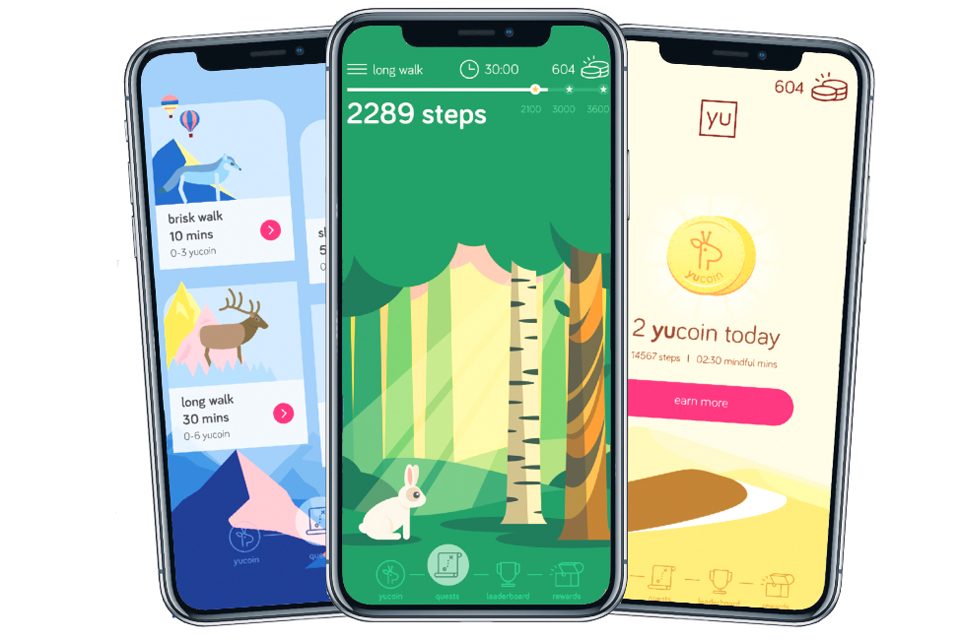 Dressed in a tie-dye T-shirt and jeans, Sammy Rubin looks more like a climate change activist than the chief executive of an insurance company. But then, there’s a lesson on why you shouldn’t judge people on how they look.

Indeed, there are many things we can learn from Rubin – his hippyish dress-sense feeds right through to the meditative way he talks about prioritising mental health over material wealth.

Rubin is the founder of wellbeing life insurer Yulife, which aims to encourage positive changes in its users by rewarding everyday activities through its game-style app.

By engaging in healthy activities like walking or meditation, you can earn virtual Yu Coins – or what Rubin describes as the “currency of wellbeing” – which can be exchanged for real-life rewards like Amazon or Asos vouchers.

While Rubin admits that he has created a bit of a hippy company, that’s not to say that Yulife isn’t a serious life insurer – evident by the fact that it’s partnered with one of the world’s largest insurers, AIG, which provides the licence for the product.

Yulife offers life insurance cover to business teams – whether that’s small 20-person companies or those with 500 staff members – so that employees can protect their loved ones financially if they become unwell or die. Policies start at £4.99 each month, per member.

Rubin is no stranger to the insurance industry, having built a successful startup straight out of university back in the 80s. That company, called Policy Portfolio, was listed on the London Stock Exchange just four years after launch, before eventually being sold to asset management group Investec.

The computer scientist is honest about the pressures of running a publicly-listed company. “At the time, I was the youngest director of a public company. And even though I had material success – that is, success in a conventional way – I was actually burnt out physically, emotionally, and mentally.

“I hadn’t taken a break since university, and I’d been immersed in this business that had a lot of public exposure. Ultimately, I was prioritising the wrong things, prioritising material success over everything else.”

Feeling like this is becoming more of a therapy session than an interview with a chief exec, I ask how this made him feel. “I loved the thrill of building a business but it was at my own expense,” he admits. “I was deeply unhappy and disconnected from myself.”

It was at that point that Rubin decided to take a six-month sabbatical to do some soul-searching. He met his now wife in Arizona, made some simple changes to his lifestyle, and decided to step down from running the business. And before coming back to the UK, he spent several years living in Safed in Israel.

During this time, he tells me that he realised he didn’t have to sacrifice his wellbeing to be the boss of a company. “I saw an opportunity for a new type of business, where you can look after your customers and colleagues and have a sense of balance as well.”

Rubin later got on board to build VitalityLife, which was the first insurance company to reward a healthy lifestyle. Once that was rolling, the entrepreneur couldn’t shake the sense that he wanted to build a business of his own completely from scratch.

“Life insurance should be about inspiring life, but all these companies focus on death. You can hold a life insurance policy for decades and it expires – so I thought why not get value out of the life insurance on an ongoing basis, rather than at the end when you claim in death?”

To make sure that he wasn’t falling into the conventional trappings associated with the insurance industry, he hired a team of people who had largely come from outside the sector. Some had worked in fashion or fintech, while one team member is a part-time rabbi. Yulife also has partnerships with high-profile wellbeing brands like author and physician Dr Chatterjee and food writer Deliciously Ella.

“Unfortunately, life insurance has a reputation for its grey suits, and for being staid and complex, so to take people from the same industry would reinforce that same image,” Rubin explains.

The challenge, he says, was to encourage behavioural change in its users. That was where the idea of a game format came into play, using people’s competitive nature to help them push through the levels, or “quests”, and achieve their goals. Each company has its own leaderboard, so team members can compare their progress with colleagues.

The app connects to other wellbeing platforms. For example, if you meditate for two minutes using a mindfulness app like Calm, you earn a Yu Coin.

My immediate thought here is about data security, not just in terms of the sharing of information between apps, but also about how that data is ultimately used. Indeed, many of us would probably have concerns if asked to share personal information about our health with our employers.

But Rubin says Yulife will never penalise people for their data – only reward them. “We are obviously very careful around data protection. But ultimately, we are using that information to help people change their lifestyle – we want them to gain something from their own data.”

The aim is to have wider benefits on company culture too. Staff who are healthier and happier are more likely to do their jobs well, which in turn has a positive effect on the rest of the business.

I admire Rubin for talking so honestly about his own mental health, which reminds me of the respect given to Lloyds chief Antonio Horta-Osorio for being open about his struggles with stress and anxiety when turning around the bank’s fortunes.

It’s only really now that we’re starting to have healthy conversations about the pressures facing high-level business people – and if these conversations trickle down to the rest of the team, everyone’s a winner.

Rubin says that we tend to compartmentalise our work and personal lives, when the two are inextricably interlinked. Ultimately, we should be free to be who we are at work – and if that involves wearing a tie-dye T-shirt rather than a suit, so be it.