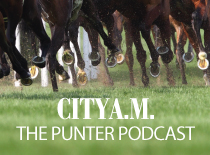 Olly Murphy talks to us about his chances of landing a winner or two this weekend. He has runners at both Haydock and Ascot.