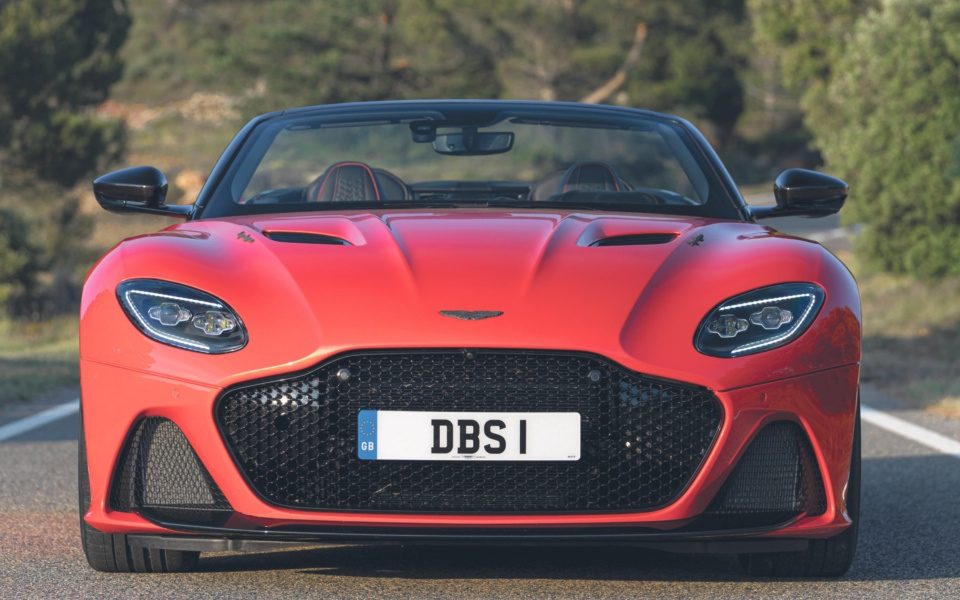 Forgive me, officer, for I have sinned. If absolute power corrupts absolutely, then 725 metric horsepower tests even the sternest sense of resolve.

It will blast you to 62mph in less time than it takes to say ‘Aston Martin DBS Superleggera Volante’ and leave black lines on the Tarmac longer than the Costa Brava. Thankfully, the Spanish traffic cop is only booking me for an illegal left turn; he clearly doesn’t appreciate how damn disciplined I’ve been. I pay the €100 fine and rumble gingerly away.

Later, when I retrieve the crumpled ticket from the glovebox, I note that by ‘Tipo de vehiculo’, he has written ‘supercoche’. We might not agree on my manoeuvre – and no amount of mumbled apologies in English would change his mind – but this certainly is a supercar: ballistic, blue-blooded and worthy of any bedroom wall. Yet the Volante is also a ‘super-GT’ (Aston’s words), a luxurious trans-Europe express that straddles the gap between Ferrari 812 Superfast and Bentley Continental GTC. With the roof retracted and temperature a balmy 31 degrees, my righteous rage soon subsides. Perhaps taking it easy won’t be so hard after all.

Indeed, effortless low-rev torque is what defines the DBS. With a monstrous 663lb ft from just 1,800rpm, it feels like the rear wheels could reverse the Earth’s rotation. Its 5.2-litre twin-turbo V12 works with an eight-speed paddleshift gearbox and carbon fibre propshaft, serving up 0-62mph in 3.6 seconds and 211mph flat-out – achievable with roof on or off, which must be like rolling down the window of a jet plane.

After my earlier altercation, I stick rigidly to the autopista speed limit out of Barcelona, enjoying the calm of the Aston’s cabin. With eight-layer fabric hood folded and windows raised, it’s quiet enough for normal conversation at 120kph (75mph), and the quilted leather seats are soft and supportive. Anyone wedged in the toddler-sized rear chairs won’t feel so lucky, however, while the DB11 dashboard and dated Mercedes media system disappoint in a car costing £247,500. Compared with the £176,000 Bentley, it doesn’t feel sufficiently special.

No matter: the mountains loom ahead and any quibbles about interior trim are swiftly forgotten. Switching from GT mode to Sport+, the exhaust baffles open and the V12 fills its lungs with a rapacious roar. Acceleration is so savage, so brain-scrambling, I have to remind myself to breathe. And the noise – amplified, of course, by the Volante’s open cockpit – feels equally overwhelming: a shock-and-awe symphony of induction snarl, turbo whoosh and tailpipe crackle. Weeks later, I still get goosebumps thinking about it.

I stop at the summit to admire the view. The Prades mountains are beautiful, but the DBS – particularly in pearlescent Cosmos Orange – is no less captivating. Details such as the ‘curlicues’ behind the front wheels and double diffuser create real downforce without resorting to giant scoops and spoilers. It’s taut and athletic, yet impossibly sensuous and romantic. Cards on the table, I think it’s the best-looking new car on sale.

Times are changing at Aston Martin. The DBX SUV arrives soon, along with two hypercars and a sharper, sportier new Vanquish (the latter driven by Daniel Craig in the forthcoming Bond film). In a few years, the old-school DBS may be usurped by a brave-new-world electric Lagonda. Catch one while you can – and if you can.