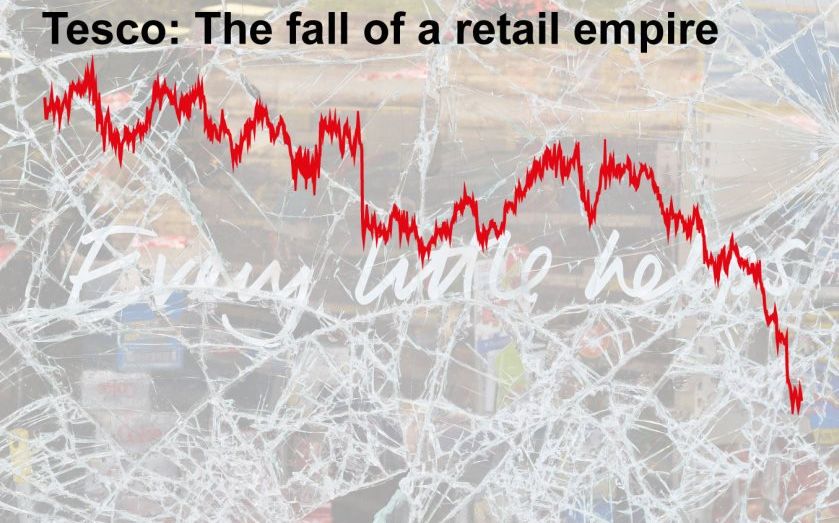 We knew it was bleak for Tesco, we were just waiting to put a figure to the despair.
Now we know: the profit overstatement was understated by £13m (the final figure was £263m) and a 91.9 per cent plunge in pre-tax profits to £112 million for the first half of the year. The results are so bad that chairman Sir Richard Broadbent has stepped down.
Shares dropped as far as 5.5 per cent in early trading and were down 5.2 per cent at the time of writing.
It has been a turbulent few years for the supermarket giant. Once, Tesco seemed to have the world in its aisles, with stores as far-flung as Japan and the US.
But bit by bit, the retailer's empire has begun to crumble. 2014 became a year of profit warnings and high drama, culminating in a baptism of fire for new boss Dave Lewis, who only started on 1 September.
Barely three weeks after his first day, the company suspended several senior staff members after it discovered a £250m black hole in its profit forecast.
What followed was mayhem: Blackrock, a major investor, slashed its stake, while ratings agencies put the retailer on negative watch, just weeks after Standard and Poor's had cut its rating to "BBB" from "BBB+". There was even talk of executives being hauled before MPs.
Here, charted, is the decline of a giant.
Pinch and zoom to see the detail on mobile. 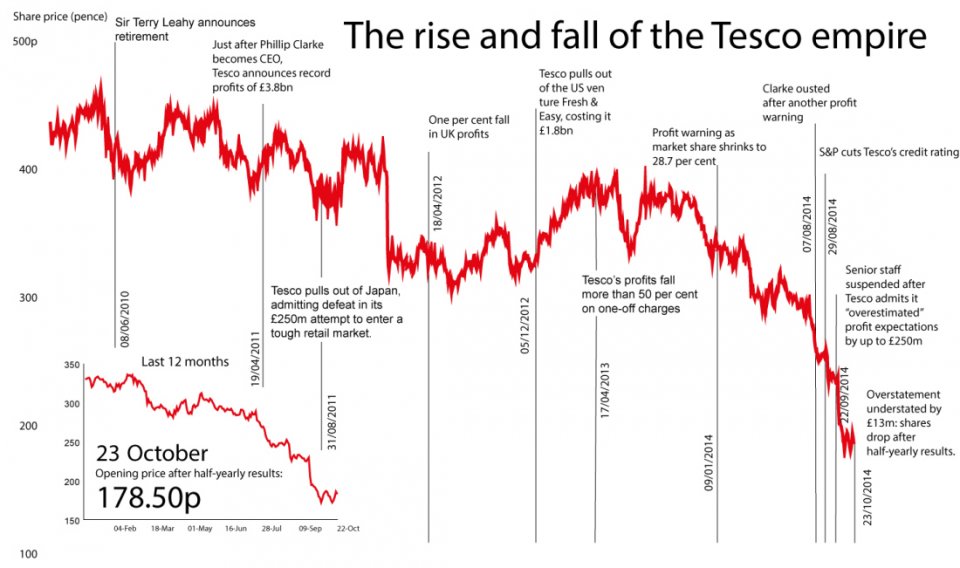 Tesco has a long way to go to arrest its fall from grace. Jon Copestake, retail analyst at The Economist Intelligence Unit, saw only one positive:

The bad news doesn't seem to have an end at present.
Tesco's like for like sales fall also comes as the firm sits bottom of a customer satisfaction survey, despite an £800m investment in better stores and services by Philip Clarke, Lewis's successor.
To top things off Lewis will have to face the future without the Chairman, Sir Richard Broadbent, who is stepping down in light of the accounting scandal.
If there is a silver lining for Tesco it is that Lewis will no doubt now have carte blanche in engineering a turnaround. As an outsider he comes in unencumbered by the firms previous mindset and has a clean slate to work from with the blame for the current malaise firmly directed at Lewis's predecessors.