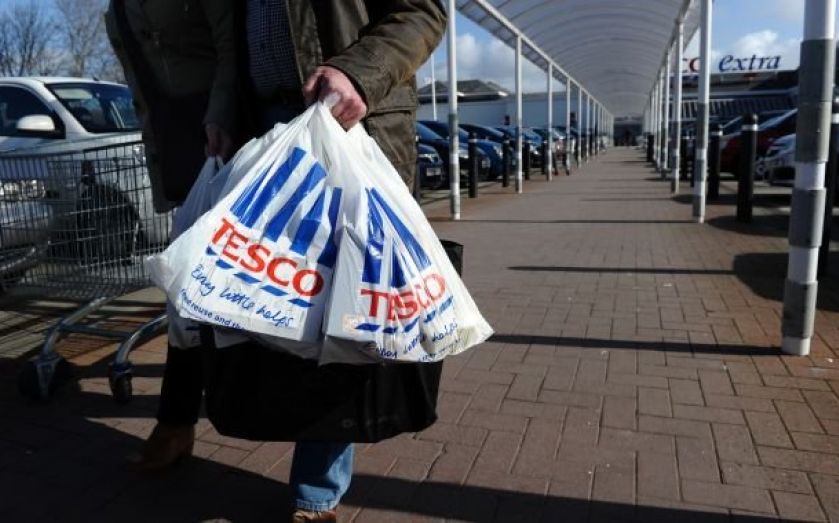 Shares in Tesco closed down 6.6 per cent in early afternoon trading, after the supermarket posted first-half results showing statutory profit before tax, which includes one-off items, collapsed by 91.9 per cent to £122m in the 26 weeks ended 23 August 2014.

Sir Richard Broadbent, Tesco's chairman, announced he will step down, while the embattled supermarket admitted an independent investigation by Deloitte had found it had understated its £250m profit "overstatement" to the tune of £13m: the final figure came in at £263m.

The accounting error concerned Tesco's method of booking payments from deals with food suppliers early while at the same time pushing back the recognition of costs.

Timeline of a retail catastrophe: How Tesco's last four weeks have unfolded

Tesco's next chairman: Runners and riders

Like-for-like sales excluding VAT and petrol in the UK fell by 5.5 per cent in the second quarter. The string of bad news comes only days after latest industry data showed Tesco's sales falling at the fastest rate in the sector.

If anyone was in doubt the FTSE company is facing serious challenges, Tesco has abandoned its outlook for profits in 2014 due to "a number of uncertainties". Tesco warned full-year profitability could be "further impacted" by its woes.

Broadbent, who took control of the board in 2011, spoke of "profound regret".

The issues that have come to light over recent weeks are a matter of profound regret.  We have acted quickly to clarify the financial performance of the company.  A new management team is in place to address the root causes of the mis-statement and to develop and implement the actions that will build the company's future.  I am confident that the new chief executive and chief financial officer will move rapidly and effectively in this respect.
I will begin now to prepare the ground to ensure an orderly process for my own succession at that time.  My decision reflects the important principle of accountability on behalf of the Board and will support the company to draw a line under the past as it enters the next phase of its development

Tesco chief executive Dave Lewis, who has been in the job just 53 days, added:

Our business is operating in challenging times.  Trading conditions are tough and our underlying profitability is under pressure.  We do however face these challenges from a position of market strength and I have been heartened by the team's welcome and their determination to stay focused on doing the very best for our customers.

Lewis said this morning there was no evidence that the grocer's massive profit overstatement was done "for personal gain".

However, current Tesco bosses aren't the only ones who are starting the day with bad news. Former Tesco CEO Philip Clarke and finance director Laurie McIlwee will not be receiving payoffs due to them until the end of an investigation by the Financial Conduct Authority (FCA).