Britain's second biggest homebuilder said full-year revenue rose 17 per cent to £2.7bn, up from £2.3bn a year earlier. This was helped along by operating profit which swelled 53.6 per cent to £480m.

Total average selling price rose by 11.5 per cent to £213,000 thanks to better quality locations as well as house prices. At the end of the year its order book represented 6,601 homes "which we believe is the optimal size for the business at this point of the cycle". 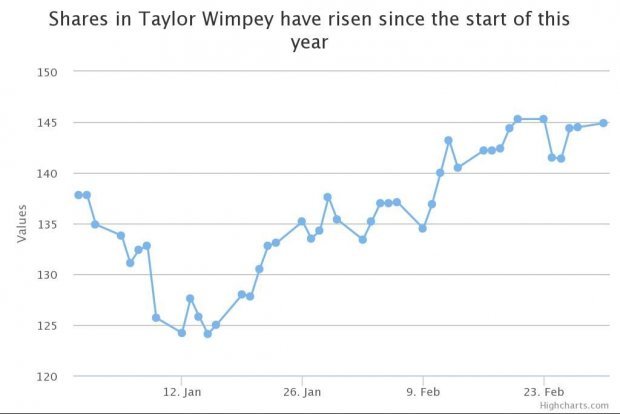 Full-year revenue was lifted by improved selling prices across the UK and higher volumes. Property prices posted stellar gains throughout the first half of 2014, however they then slowed somewhat, as new tighter lending policies introduced by the Bank of England began to take effect.

Taylor Wimpey, which builds one-to-five bedroom homes, must contend with uncertainty ahead of the UK General Election in May as well as a slowing property market. Despite this, it said the outlook was largely positive.

"Whilst there remains uncertainty around the outcome of the General Election in May, consumer confidence remains solid and is supported by healthy underlying demand, low interest rates and high levels of employment," it said. "We therefore consider that the UK near-term market risk is low."

Pete Redfern, chief executive of Taylor Wimpey, said: "The beginning of the spring selling season has seen trading at the better end of expectations. Customer confidence is high with good levels of employment and an affordable mortgage environment."

"The UK housing market remains healthy and we are very confident in our ability to maximise returns on our investments whilst continuing to invest in the underlying quality of the business."

"We believe that the current strong performance can be sustained and improved and therefore we have proposed a doubling of the 2014 maintenance dividend pay-out to the top end of our dividend policy range."

Taylor Wimpey's full-year results were buoyed by low interest rates, government schemes and strong economic growth.It has joined other homebuilders such as Persimmon in shrugging off uncertainty ahead of the General Election.