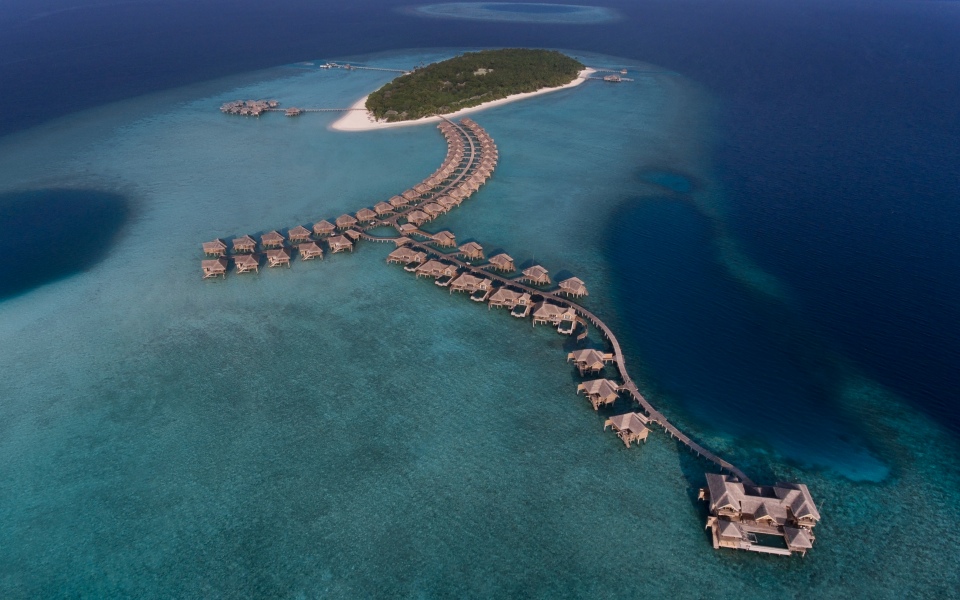 Any island resort staffer can say “welcome to paradise”, but when it comes from a seaplane pilot with no shoes on it feels more like a religious ritual than a tired cliche. It’s contagious, as the staff at Maldivian island resort Vakkaru can vouch for, guests – certainly me – ditch the formality and stress along with their footwear in the first hours of their stay.

But there is something more engrossing outside the window than assessing the pilot’s laissez-faire approach to uniforms as we glide above the Baa Atoll. From the sea-plane, we see the contrast of the inky blue Indian Ocean and the electric turquoise rings of coral which pock-mark its surface. The ever-present overwater villas – the unofficial logo of the Maldives – spread like tentacles from the islands below, each one stretching further out into the ocean than its neighbouring rival.

Read more: Last year’s attacks saw tourism to Sri Lanka all but vanish – but now it’s surging, thanks to a revived wellness industry

Our own version of the Maldivian cliche is jaw-dropping: perched at the end of the pier, with its interiors designed by Danish firm O.T Design, it’s Scandi-meets-sandy with a colour palette of oatmeal, white and mustard. It boasts all mod-cons at the touch of an iPad or a call to our butler, Buddy. Despite the high-tech interior I’m always drawn outside, be it by the outdoor shower, the lapping lagoon, or the balcony that houses daybeds to sprawl on, and two net hammocks jutting out over the coral.

Most overwater villas have their own pools, for those times when you just can’t be bothered descending the dozen steps to the ocean below. With all these options for slothfulness, the only stressful thing was figuring out precisely what order to relax in.

Newly opened Vakkaru has 59 overwater villas, with the remainder of its 113 suites ringing the island’s beach, but with 2,000 palms dotting the small island (it used to be a coconut farm) it never felt busy. Crucially, the relative isolation of Vakkaru’s island means that the views from your seat, whether perched at one of its restaurants or your own balcony, is never obstructed by a rival resort.

It’s this far-flung and understated luxury that recently lured Madonna and her troupe of children to spend a week enjoying Vakkaru, following in my footsteps (as always). And while Madge chartered a yacht to explore the surroundings, my low-key yet enduring memory will be watching the late afternoon light change from my hammock over the Indian Ocean.

Read more: The best luxury resorts in the Alps – where to stay and where to ski

There are more than a few payoffs for those that can prise themselves up from the hammock-encrusted balcony though, as newbie Vakkaru has had to reach a high standard of service at its spas and specialty dining to compete in this island nation of luxury accommodation. Vakkaru is one of 130 resorts now established in the Maldives, and nearly all of them have their own islands – but think of them as tropical fiefdoms, where your experience can sink or swim based on the facilities, food and friendly staff.

Choosing one may be the exemplary first-world-problem but it’s one worth a bit of research beforehand since, once you set foot ashore, you’re a captive audience. Thankfully Vakkaru’s five restaurants keep things interesting. A traditional private Maldivian feast on the beach, dubbed ‘destination dining’, brought tears to my eyes – in large part because I insisted I could handle the spice levels powered by the native Maldivian chilli loved by the locals. I could not.

You could visit the Maldives and remain completely unexposed to the island nation’s cuisine, instead drowning in western buffets and pan-Asian menus. But not at Vakkaru.

Meanwhile, there’s a wine cellar-turned bar and the cocktail list at the overwater (have you guessed the theme yet?) Lagoon Bar draws on local flavours, such as pandan, lime, coconut and sappan wood.

And while the view overwater – whether from 12,000 feet, through the glass floor while a masseuse attempts to undo a year’s worth of knots, or from your hammock – is inimitable, it’s what’s lurking underwater that brought us to this corner of the island state.

Maldives’ Hanifaru Bay in the Unesco Biosphere Reserve of the Baa Atoll area is world famous for its visiting manta rays who feed there, and the temperamental weather that welcomed us (perfection exists only on Instagram) has hopefully whipped up a buffet of microscopic crackling plankton.

Manta expert Tatiana welcomes us aboard for our speedboat trip to nearby Hanifaru. It’s the end of the season (roughly July-November) but she’s hopeful the remaining mantas will be lurking, lured not only by a plankton feast, but a couple of “cleaning stations” set up in the white sands below. We’re not the only ones being treated in the Maldives. “They are like spas for the mantas, and there are little fish which come in and buffer their skin and eat their parasites.”

Mere minutes after we gracefully flop into the bay and Tatiana is proven correct, a black diamond disc circles below in the slightly murky water (gin-clear seas, we’re told, would mean a lack of plankton – so the slight murkiness makes for great manta-spotting, although bad for photographic proof). We dive down below, only to be met by the creature swooping up towards the surface. Her mouth is ajar, accentuating the fact she’s as wide as a car from fin-to-fin, gulping another mouthful of this microscopic buffet. It gracefully backflips, well clear of its impressed audience.

Read more: Japan – with kids? Believe it or not, it works

We are in awe, transfixed by the rhythmic undulating fins as she glides past. Tatiana tells us that in peak season hundreds can gather in the shallow waters of Hanifaru for feasts of plankton, but even spotting two of these gentle giants dancing, swooping and gliding below has us on a high.

Vakkaru delivers on another lofty promise – and we’ve only been ashore for 48 hours.

Exsus Travel offers a 7-night stay at Vakkaru in a Beach Villa from £2,980pp based on two adults travelling in May 2020 on a bed & breakfast basis. Price includes return economy flights with Emirates and return seaplane transfers. Complimentary upgrade to half board when you book before 31 March 2020. Visit exsus.com or call 0207 563 1303