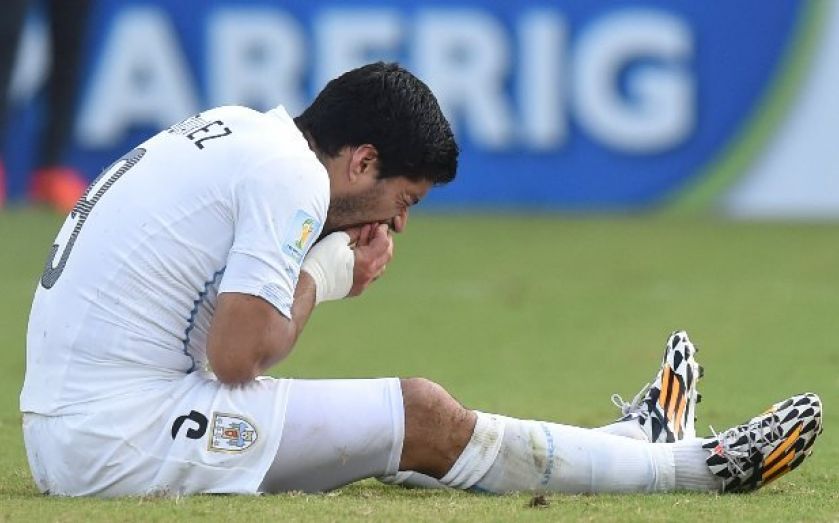 Luis Suarez will have been suspended a total of 38 club matches in the four years from November 2010, the equivalent of an entire Premier League season, without having been sent off once.

Fifa's disciplinary committee announced that the Uruguayan striker was banned for nine international matches and suspended from all football related activity for a period of four months for biting Italy's Giorgio Chiellini on Monday.

The Liverpool forward is set to be out until the end of October, missing the first nine Premier League matches of the season, three of six Champions League group games and the third round of the Capital One Cup.

Taking into account the nine international matches he will also miss as a result of the ban, he will have been out for 47 matches for club and country since November 2010.

While his future is now in serious jeopardy as a result of his latest indiscretion, if he does remain at the Merseyside club he could return to action if Brendan Rodgers' side make it into the fourth round of the minor domestic cup competition on 28 October. His first game in the Premier League would be on 1 November against Newcastle.

Since his first offence, when he was banned for seven games after sinking his teeth into PSV's Otman Bakkal while playing in the Eredivisie for Ajax, Luis Suarez has missed eight games for racially abusing Manchester United's Patrice Evra and 10 games for biting Branislav Ivanovic in 2013. He is now set to miss 22 games, 13 for club and nine for country.

Surprisingly, he has not been sent off in this period, as none of the transgressions that led to him being sidelined were spotted by the match officials. He has received all suspensions retrospectively.

Like the FA when Suarez bit Chelsea's Branislav Ivanovic, Fifa utilised video evidence to slap him with the latest ban. The punishment is the longest suspension Fifa have handed out during a World Cup, surpassing Mauro Tassoti's eight-game suspension for breaking Luis Enrique's nose with an elbow in the 1994 World Cup.