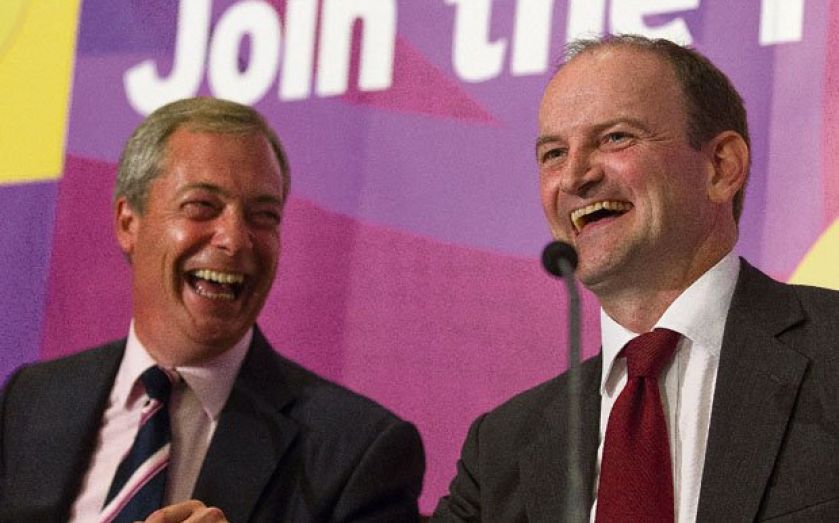 Conservative MP and eurosceptic Douglas Carswell stunned his party yesterday by announcing that his defection to Ukip, triggering a by-election in his Clacton, Essex, seat and a head­ache for Prime Minister David Cameron.

Ukip leader Nigel Farage used the defection to claim that other MPs were considering joining his party. But Tory eurosceptics were quick to dist­ance themselves from Farage – and many hit out at Carswell’s decision.

“This is a totally counterproductive decision and the timing is odd,” Bob Neill MP told City A.M. “Eurosceptics in the party feel let down. We should be uniting the party on this and not dividing it.” John Redwood MP, a longstanding critic of Brussels, said of Carswell: “Six months ago he was urging us all to stick together. It’s curious. I know of nobody else who would follow his lead.”

Bill Cash MP slammed the defection as “a self-defeating exercise in political vanity”, while Bernard Jenkin MP said that Carswell “may come to regret” the move. “The only person to benefit from this really is Ed Miliband,” added another MP, Philip Davies. “It’s a disappointing setback.”

Carswell, who revealed the news at a press conference with Farage at his side, is understood not to have shared his plan with any of his fellow euro­sceptic MPs before announcing it.

“I’ve had more sleepless nights than you can possibly imagine. I am standing here precisely because I know that neither side wants real change,” Cars­well said, adding: “I happen to like David Cameron… he is just not serious about the change we need.”

“It’s obviously deeply regrettable when things happen like this, when people behave in this way,” Cameron said yesterday.

“It’s also, in my view, counterproductive. If you want a referendum on Britain’s future in the EU – whether we should stay or go – the only way to get that is to have a Conservative government after the next election. And that is what until very recently Douglas Carswell himself was saying.”

The by-election is expected in early October, after the Conservative party conference.

Bookmakers have Ukip as odds-on favourites to win the seat and return Carswell to Westminster as the party’s only MP.

Despite a Tory majority of more than 12,000, many voters and activists are expected to stay loyal to Carswell and follow him to Ukip.