ASOS, the online clothing retailer, recently announced a target of zero net carbon emissions by the year 2030. It’s a move that comes following ongoing criticisms of the environmental impact of “fast” fashion organisations – and one that YouGov Plan & Track data shows may be a deft commercial move as well.

Nearly one in five consumers (18 per cent) say they “only buy clothing from sustainable providers”, and these consumers have significantly worse opinions of ASOS than the rest of the country. Among the wider public, ASOS had a Reputation score (which measures whether you would be proud or embarrassed to work for a particular retailer) of 4.3 as of September 17 2021; among people who claim to only buy from sustainable brands, its reputation score was -2.6. 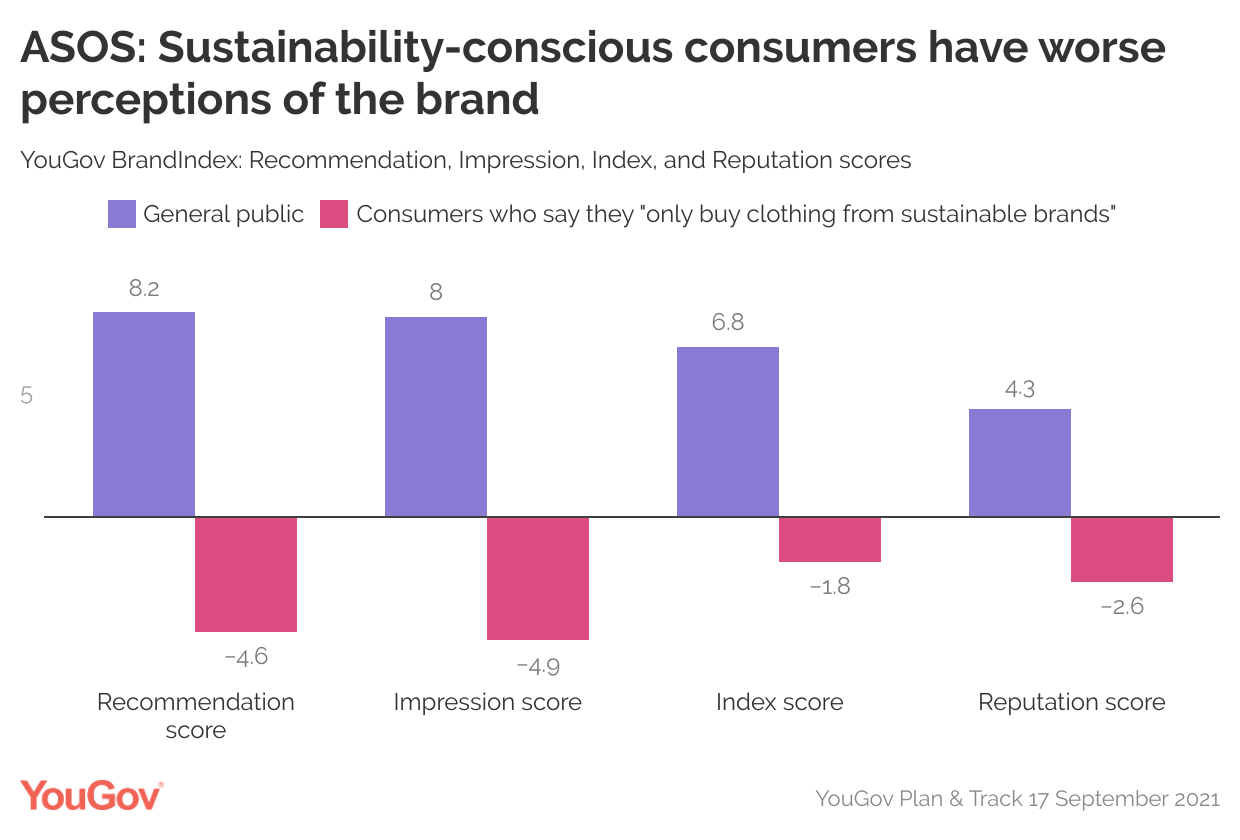 Overall Impression scores for the brand, which measure whether perceptions of a company are good or bad, were even worse: while the broader group of consumers have a solidly positive view of ASOS (8.0), the more eco-conscious demographic is firmly negative (-4.9). Recommendation scores were also 12.8 points lower within the latter group (-4.6) than the former (+8.2).

With this in mind, it makes sense that the retailer’s Index scores – a measure of overall brand health calculated by taking the average of Impression, Quality, Value, Satisfaction, Recommend and Reputation scores – also suffer. While scores among consumers as a whole are at a solid 6.8, among those who prize sustainability they are at -1.8.

There is some indication that those who say they only buy from sustainable brands aren’t boycotting ASOS entirely. For one thing, Current Customer scores – which track whether consumers have bought a product from a fashion retailer in the past three months – are still positive (3.3.), albeit less so than they are with the general public (6.8). This might suggest that many don’t perceive ASOS as a particularly irresponsible brand, or perhaps that their commitment to environmentally-friendly fashion isn’t as solid as they say.

Nevertheless, with COP26 around the corner, ASOS’ pitch to the eco-conscious public comes at a good time. A significant minority are saying that sustainability is a priority for them – and with environmental issues taking on more and more importance to the public, it makes sense that fast fashion readers would try to get them on board.