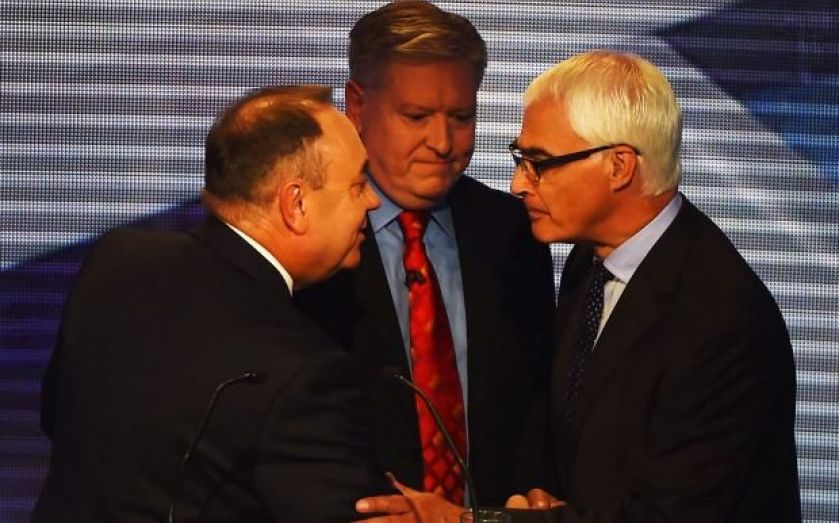 Alex Salmond is refusing to wilt after the pasting he received at the hands of Alistair Darling.

The Scottish first minister was widely judged to have lost his debate with the former Labour chancellor, and was booed by sections of the audience for failing to outline a plan B should Scotland be unable to retain the pound.

All three main parties in Westminster have advised Salmond that they will not allow Scotland to use the pound, but Salmond, rather than coming up with a back-up plan has opted to reinforce his position.

"There is literally nothing anyone can do to stop an independent Scotland using the pound" wrote Salmond in an article for the Sunday Herald.

Darling, for his part, doesn't see it that simply. "This isn’t like dividing up a record collection after a break up," he wrote in a blog for Better Together.

Even if both a separate Scotland and the rest of the UK could agree a deal to create a Eurozone-style currency union, we would be giving up control of our taxes, our budget and our interest rates to what would then be a foreign country.

If Scotland does vote yes and decides to keep the pound without agreement, it wouldn't be blazing a new trail. Other countries have done it, such as Ecuador and Panama, which both use the US dollar. Panama has had duel currencies since 1903 and Ecuador since 2000. As Sam Bowman of the Adam Smith Institute says, they aren't doing badly.

An independent Scotland could flourish either by using the pound sterling without the permission of the UK (or by setting up a “ScotPound” pegged to sterling through a currency board, which would achieve a similar end). This ‘sterlingization’ would emulate a number of Latin American countries that use the US Dollar without an official agreement with the US government.

Darling has countered that this would not be stable enough for an independent Scotland because the banking sector would lack a lender of last resort. Bowman argues, however, that Panama has the seventh most-stable financial system in the world.

Despite the continuing debate about the advantages or pitfalls of unilaterally adopting the pound, one thing looks certain: Salmond has some convincing to do.

A Survation poll for the Daily Mail showed the "No" campaign's lead had grown from six to 14 points, despite a long prior period of little change.