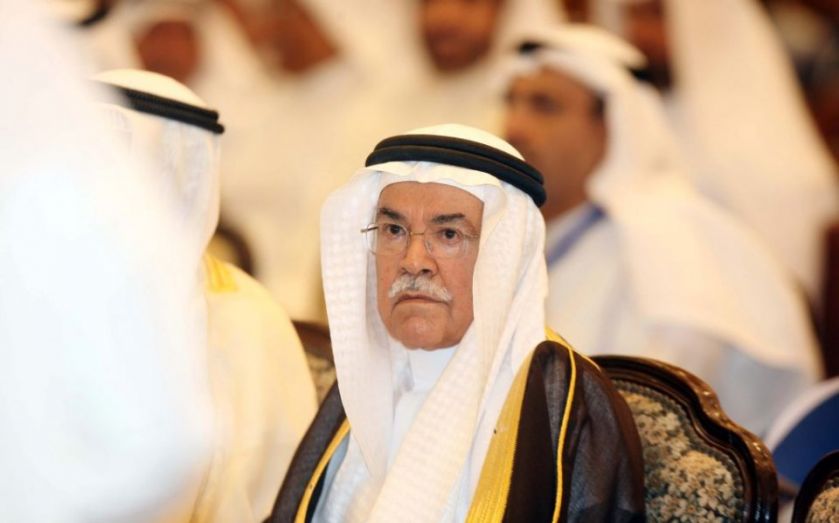 Saudi Arabia’s oil minister has insisted the country will not cut oil production to prop up prices, despite the key commodity collapsing by a further 25 per cent in value over the past month.
“Whether it goes down to $20, $40, $50, $60, it is irrelevant,” Ali al-Naimi said yesterday.
“We are going to continue to produce what we are producing, we are going to continue to welcome additional production if customers come and ask for it.”
Brent crude oil prices – an oil price benchmark – dropped by 2.17 per cent yesterday to $60.05 a barrel. It is nearly half the price it was in June. On 23 November it was $80 a barrel.
He also believes Saudi Arabia’s counterparts in the Organisation of Petro­leum Exporting Countries (Opec) will adopt a similar policy.
“As a policy for Opec, and I convinced Opec of this, even Mr al-Badri [Opec secretary general] is now convinced, it is not in the interest of Opec producers to cut their production, whatever the price is,” al-Naimi told the Middle East Economic Survey.
Referring to countries outside Opec, he said: “If they want to cut production they are welcome. We are not going to cut, and certainly Saudi Arabia isn’t going to cut.”
Opec resisted cutting back on production in its November meeting, where the cartel decided to keep its target output unchanged at 30m barrels per day.
The oil minister’s comments may have buoyed global stock markets.
The FTSE 100 gained 0.48 per cent while in the US the Dow Jones Industrial Average climbed 0.87 per cent to reach 17,959.44. The end of year Santa rally may take the Dow nearer the 18,000 mark which it has yet to surpass in its history.
Stocks on the continent also edged up, with the German Dax rising 0.81 per cent and the French Cac 40 gaining 0.3 per cent. Even stocks in Athens jumped by 0.63 per cent yes­ter­day ahead of a new round of presidential elections today.
Despite oil prices slipping slightly yesterday, the Russian rouble shot up by eight per cent against the dollar. It now takes 55 roubles to purchase one dollar, the lowest amount of roubles required for 10 days. Over the past three months, any decline in oil prices has been closely followed by a similarly sized drop in the rouble.
The rouble rebound also came despite Russia’s former finance minister Alexei Kudrin issuing a stark warning on the economy.
“We are entering or have already entered a full-blown economic crisis, and we’re going to feel it to the full next year,” Kudrin said.
Some analysts have suggested that Opec is refusing to slow production so that it can keep its market share.
“The Saudis seem to be continuing with their game plan to shock prices lower by sticking it to the market that they will put more oil out if they have more customers for whatever price they are comfortable in selling,” said John Kilduff, partner at New York energy hedge fund Again Capital.
“It seems like an all-out strategy on their part to finish all the weak players in the market who can’t survive at sub-$60 or even sub-$50 oil.”
Meanwhile, the most heavily indebted oil companies in the world were primarily based in Latin America, said Capital Economics. Brazil’s Petrobras and Mexico’s Pemex are singled out as having borrowed aggressively in recent years.