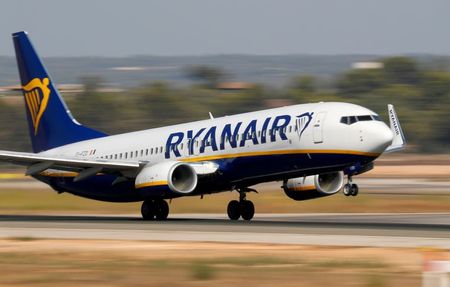 Ryanair will create more than 500 new jobs across its London airports this winter as the budget airline looks to take advantage of the recovery from the Covid-19 pandemic.

The carrier will launch a combined 14 new routes over the season from Stansted, Luton, and Gatwick to a number of European destinations.

Chief executive Michael O’Leary said that the carrier was on track to hit 100m passengers in 2021, with monthly passenger numbers set to hit pre-Covid levels in November.

The airline carried 10.5m passengers in August, which O’Leary said was about 80 – 85 per cent of pre-pandemic levels.

Next summer Ryanair is due to take delivery of 60 new Boeing 737 Max aircraft, which O’Leary said would enable the carrier to snap up the free capacity in the market.

With both Thomas Cook and Flybe having gone bust in recent years, he said that the amount of short-haul capacity in Europe would be 20 per cent lower than pre-pandemic.

“Only we have the new deliveries to take up the capacity”, he told a press conference.

The Irishman called for the government to scrap Air Passenger Duty (APD) on short-haul travel for “at least” the duration of the pandemic.

“APD makes UK airports uncompetitive against lower cost EU airports. While Ryanair is committed to its London airports, the lack of government support for aviation and tourism recovery creates further barriers to trade and growth.”

He also said that the UK should join the EU’s digital Covid “vaccine passport” in order to encourage more European passengers to visit the country over the winter period.

“Americans and Asians are not going to come to the UK this winter, so we need to encourage Europeans to do so instead.

“We have to make it easier [for them to come]. Pissing about with all these PCR tests… is nonsensical.”

He said that there should be no travel restrictions for anyone who had been fully vaccinated.

Despite 18 months of travel disruption, O’Leary said that the carrier would not need to raise more cash over the winter period.

Last week British Airways confirmed that it was exploring plans to set up a new short-haul carrier at Gatwick.

Commenting on the move, O’Leary said that the move was the “definition of insanity”.

“It is the third or fourth time BA have tried to do this… It will never successfully set up a low-cost carrier at Gatwick.”

He added that it was far cheaper to run short-haul flights out of airports like Stansted and Luton.