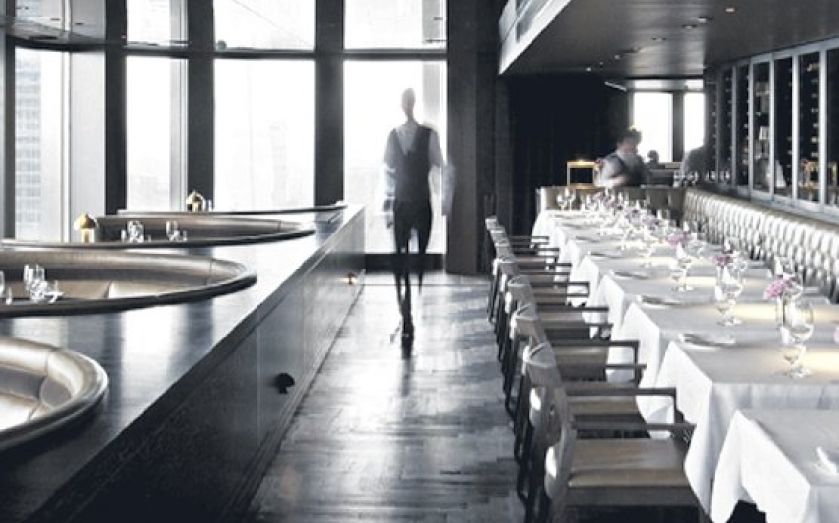 I’ve eaten at altitude so many times recently I now have a permanent nosebleed. It’s all over my shirt and my shoes and my food and nobody cares, because the whole of London has the same problem. All anyone in this city does now is eat atop skyscrapers. Like one of Dr Pavlov’s dogs, I only salivate while peering down into the tip of the Gherkin (something which might also interest Dr Freud). If they all closed tomorrow, I would surely starve. But there is little chance of that – you can’t move for the things, and now there’s yet another one up Tower 42, which might just be the ugliest building in the universe.

The venue was previously home to Gary Rhodes’ Twenty Four, which finally packed up after 10 years of being a restaurant that everybody quite liked and then completely forgot about, partly down to the food and partly down to the tower itself, which people tend to overlook despite it being the second-tallest thing in the City.

Anyway, people are paying attention to it now, because Jason Atherton has moved in and he’s officially Hot Stuff, the man with the Midas touch, a chef who’s pulled off the enviable trick of expanding his restaurant empire to 12 venues – including Pollen Street Social, Social Eating House, Little Social, Berner’s Tavern and now City Social in the UK (he also has a hand in Lee Westcott’s new Typing Room at Bethnal Green’s Town Hall Hotel) – without everybody getting thoroughly sick of the sight of him.

City Social’s website promises “chic, sophisticated ambiance” and “the ideal environment for those in search of a discreet space to ‘talk business’” (the inverted commas seem to imply that “talking business” is a euphemism for something unspeakable). Atherton’s brief to the designers appears to have been: “Make me the exact opposite of Berner’s Tavern”. It does feel discreet – despite being 24 floors up and surrounded by floor to ceiling windows, it’s somehow still gloomy, like a speak-easy that got horribly lost on the way to the basement. While your table is splashed with light, the rest of the place fades into a pleasant, murky brown after the sun goes down. You even have to lean and squint to make out the cheese trolley a foot from your table. The jazz-age styling isn’t anything new – quite the opposite, in fact – but it’s well executed and fairly subtle; an art deco napkin holder here and jaunty soundtrack there.

It attracts a far more City-ish crowd than Atherton’s other ventures. I’ve visited at lunch and on a Monday evening and both times men in suits filled the majority of the tables, presumably “talking business”.

The menu is largely English-inspired, with global influences thrown in here and there. And as we’ve come to expect from Atherton – and from executive chef Paul Walsh – everything is immaculately presented, each dish a miracle of culinary engineering, appearing to require cantilevers and foundations. The steak tartare actually comes with a roof.

I kicked off with a rich pig’s trotter and ham hock in crispy breadcrumb, with a cylinder of black pudding wrapped in a deep-fried lattice; a combination of fiddly haute cuisine and comforting, stodgy grub. The tuna tataki is a real looker, with three pieces of seared fish topped with diced cucumber and radish, nestling among bright green globs of creamy avocado and chunks of gherkin, finished off with a sweet, smoky ponzu sauce. There’s a lot to comprehend and all of it is top notch. The tartare, with its aforementioned roof of sourdough, was a little over-complicated, with shaved truffle, dollops of truffle oil, goat’s curd, dried vinegar and tiny pickled onions all fighting for attention.

I had rabbit for my main for the first time in ages and was glad I did. It comprised of three rich, salty cuts of saddle, served with tiny, spicy rabbit sausages and heaps of asparagus. The halibut – again visually spectacular, topped with vibrant red peppers and deep fried squid – didn’t set my world on fire; nicely cooked but lacking a strong flavour to pull it all together.

The rum baba, though, was just about as good as it gets – soaked in enough rum to get you trolleyed and drowned in a strawberry daiquiri sauce that’s added with a flourish at your table – another nice, decidedly Athertonian touch.

The venue may be discreet but the food has all the hallmarks of Jason Atherton; bright and beautiful and relentlessly interesting, even when it slightly misses the mark. With starters around £14, mains at the £30-mark and decent wine starting at about £50, it prices at exactly where you would expect – it ain’t cheap but neither do you need to remortgage your house.

While Tower 42 may be a boldly untrendy location for City Social, it works. It’s a blank canvas, it lets the food do the talking. And the food says mostly good things. It sure isn’t the only restaurant in London’s sky, but it’s probably the best.