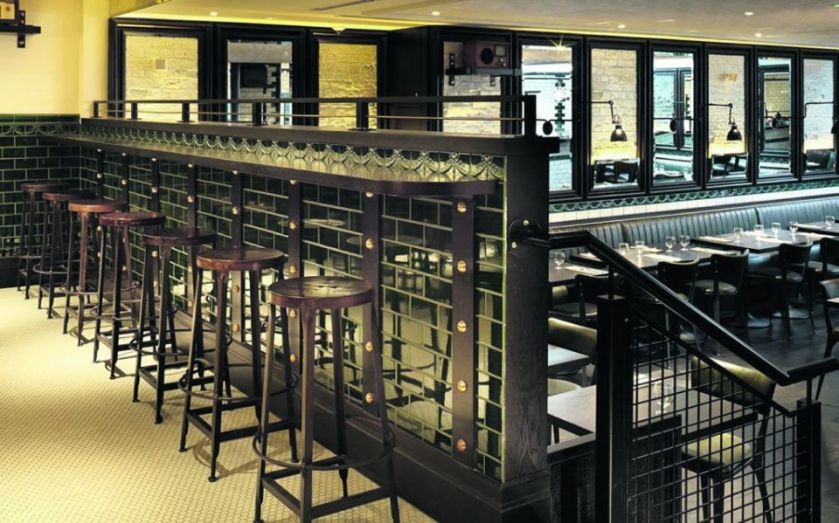 Upper St Martin’s Lane, which neatly bisects the tourist wastelands of Leicester Square and Covent Garden, seems like the last place Marcus Wareing would pick for his third UK restaurant. His flagship venture “Marcus” – formerly Marcus Wareing at the Berkeley – is a two Michelin-starred love-letter to formal dining (and home to one of my most fondly remembered meals), and The Gilbert Scott at the St Pancras Renaissance Hotel is equally genteel.

But Wareing’s already sizeable profile is about to get a further boost after being made a permanent judge on MasterChef: The Professionals, so a mid-market spin-off would appear to make sense: ride the wave while you can. How much he’ll have to do with the place is unclear – Andrew Ward (formerly of Chez Bruce and La Trompette) is in charge of the kitchen and Wareing’s operation manager will be running it.

Design-wise it’s a pleasant if by-the-numbers modern diner, with all the glazed tiles, low-watt light-bulbs and mottled mirrors that anyone who eats out on a semi-regular basis has come to expect. It seems to get nicer the higher you go, with the third floor airy and quieter than the slightly bawdy bar area downstairs. Our waiter began with the formality of explaining the inevitable “sharing concept” – this is, after all, a new opening in London, which means you’re guaranteed to be expected to split your meal with the person sitting next to you. I dream of being greeted in a restaurant with the words “Let me explain our three course meal concept”, in which I’m told that I should order a starter, main course and dessert, and that I’m not obliged to share them with anyone. 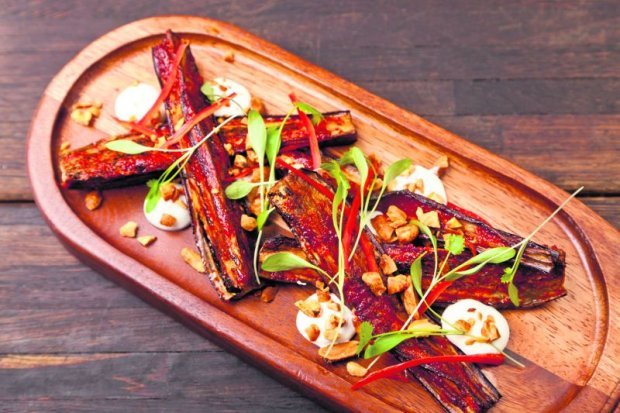 Tredwell’s menu is divided into slightly arbitrary sections including “small plates”, “small bowls” and – most infuriatingly – “pots and jars”. Quite where the boundaries between them lie is anyone’s guess. Two small dishes and one big one each is just about right, especially as they’re heavily weighted towards the “comfort food” end of the spectrum.

The powder-pink chicken liver mousse with bacon jam, for instance, is dangerously creamy, piped into a ramekin in voluptuous folds. The pork belly sliders with apple and ginger were greasy but delicious. The chorizo jam consists of spicy, smoky minced sausage the texture of bolognese that floats in a lake of angry, red oil. It tastes okay but brings to mind defibrillators and pacemakers.

From the “grills and fish” section of the menu, I had harissa-glazed aubergine with peanuts, peppers and bottarga, which was largely overpowered by the harissa. The confit cod with sweet potato was outstanding; delicate and simple – the kind of food you tend to associate with Wareing’s other restaurants.

In the face of a meal this heavy, the appearance of a “virtuous” chocolate brownie (sans wheat, dairy, eggs or refined sugar) seems slightly redundant, but I guess it’s the thought that counts. It is, at least, impressive on an academic level – how does it stay that moist? The salted caramel soft-serve with honeycomb chunks is as good an ice cream as you’re likely to find.

The bill plays the same trick on you that almost every “sharing concept” does. All those £5s and £6s don’t half add up; throw in some wine (even a carafe rather than a bottle as I did) and a couple of cocktails and you’re over the £100-mark. Is it worth it? Yeah… Probably.

It’s difficult to judge Tredwell’s on its own merits – as a much-better-than-average city diner – rather than as a part of the Wareing empire. Plenty of big name chefs have launched the culinary equivalent of diffusion lines; more affordable, accessible outposts of their businesses, but this one seems a few steps further removed from what we’ve come to expect from its owner.

That said, it’s not a million miles away in both style and substance from what Jason Atherton is doing with his 22 Ships restaurant in Hong Kong, which I love. The food is solid, if not quite spectacular. The service is snappy and informal (in a good way). The cocktails are wet.

When you’re stuck in Leicester Square after your work Christmas party, drunk and hungry, in need of respite from the sheer awfulness of everything, I hope this review pops into your head, that you gravitate here, eat some ice cream and feel better about yourself.