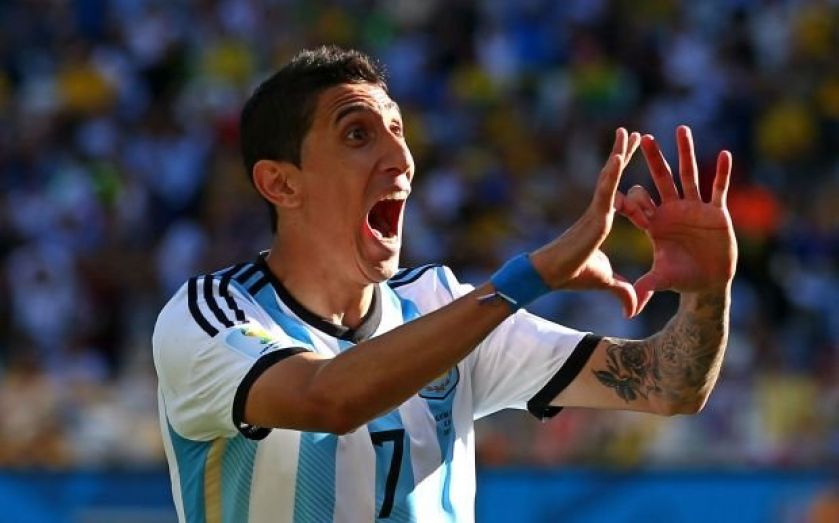 Manchester United have spent 18 per cent of all money shelled out by Premier League clubs in this summer’s transfer window so far after the £59.7m purchase of Angel di Maria from Real Madrid broke the British transfer record yesterday.
United have spent £141m of the Premier League’s current total outlay of £768m, which is itself a new record for a summer transfer window.
See every Premier League signing on our interactive map.
Despite having spent such a large percentage of the league’s total, United’s capture of five new players represents just 3.8 per cent of the 132 players bought by Premier League clubs this summer.
Alongside Di Maria, manager Louis van Gaal and vice-chairman Ed Woodward have spent £33m on Luke Shaw, £31.7m on Ander Herrera and £17.6m on Marcos Rojo. After a 4-0 drubbing at the hands of MK Dons in the Capital One Cup, it remains to be seen if this splash the cash approach can turn around the club’s stuttering fortunes.
Liverpool almost match United in the spending stakes: the Merseyside club have signed 11 new players this summer, four more than an average of seven new players signed by Premier League clubs.
As two of the three clubs who have bought just four players so far this summer, Tottenham and Arsenal’s maps look somewhat stripped down in contrast.
After Manchester United, Liverpool have the second highest proportion of Premier League transfer spend. Their £131m outlay represents 17 per cent of the league’s total. Yet while the two rivals have spent similar amounts, their approach to recruitment has been as divergent as opinions on Luis Suarez.
Liverpool have not spent over £30m on any of their 11 new signings while United have only spent less than that figure on Rojo. Quality over quantity? The early signs aren’t good for Louis van Gaal and co, but of their new signings, only Herrera has made an appearance for the Red Devils so far this season.
Yet while United and Liverpool have been waving hefty cheques at star names, many clubs in the league have had their scouts searching for cut-price deals in the free transfer or loan market.
Burnley and Stoke appear to be the most thrifty clubs so far. Despite the fact they have both signed seven new players, their collective transfer spend doesn’t even reach one per cent of the league’s total. Both clubs may only reside a short drive away from Old Trafford, but their transfer activity has been a world apart. Managers Sean Dyche and Mark Hughes have parted with just £2.2m and £4.4m respectively, less than any other club has spent on their most expensive signing this summer.
Unsurprisingly, Burnley’s most expensive signing is smallest transfer fee in the league – £1.67m on Lucas Jutkiewicz from Middlesbrough.
Our interactive map allows you to explore the transfer activity for every single Premier League club to date. Each line on the map represents the passage of one or more players. Simply hover over the line to reveal the identity of a player(s), which club they came from, who they joined, and how much they went for.
The drop-down menu in the right hand corner lets you to display the transfer activity for specific clubs.
[football_transfer_map]
All data comes courtesy of the excellent transfermarkt.co.uk