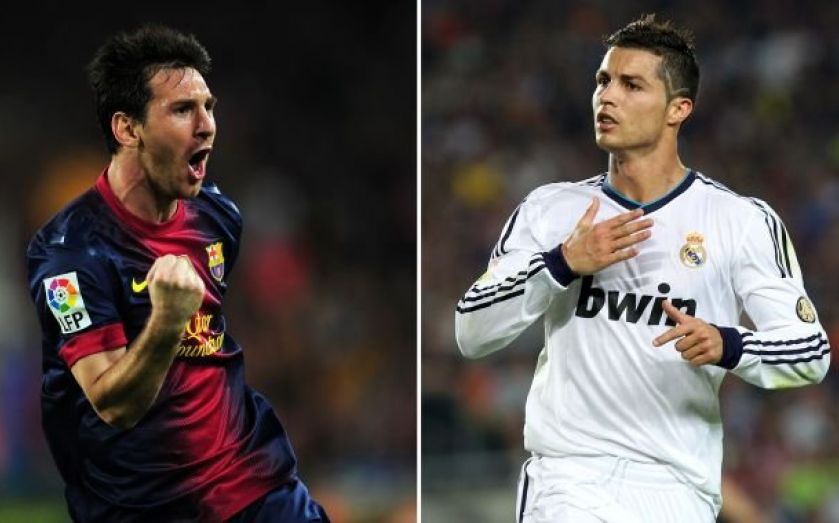 Cristiano Ronaldo and Lionel Messi have once again been pitted against each other in the running for this year’s Ballon d’Or, yet in marketing terms the battle has already been won by the Real Madrid man.
Such is the size of Ronaldo’s global fanbase that his average Facebook post is valued at $143,500 (£99,525) according to sports marketing group Repucom.
Just over 102m people “like” the Portuguese superstar on Facebook, while Messi has 75.7m “likes” with an average post is valued at $62,500 (£39,793).
In fact, singer Shakira is the only personality with more Facebook “likes” than Ronaldo.
Social media sites offer athletes direct access to their huge fan bases, and thus a key marketing opportunity for sponsors.
Ronaldo’s Real Madrid contract may be the most lucrative in world football, yet the forward also picks up $22.5m (£14.31m) a year through various endorsements, including Nike, Tag Heuer and Samsung. Messi earns $21.25m (£13.52m) a year from endorsements which include Adidas, Turkish Airlines and Gilette.
Mike Wragg, global head of research at Repucom, comments: “While it is interesting to see how these values compare, understanding, tracking and reacting to these key measurements and changes in public perception are vital for marketers and sponsors to better position their brands through the relationships they have or want to have with such public figures.”
In the past two weeks Messi’s stratospheric scoring record has seen him claim two new goal records in La Liga and the Champions League.
Yet even with those achievements to Messi’s name, Repucom’s research reveals it is Ronaldo who is most recognised around the world. Ronaldo is known to 92 per cent of people across the 15 markets monitored by Repucom, compared to 87 per cent of people who know Messi.
Wragg says: “Cristiano Ronaldo dominates in terms of overall marketability – largely because of the consistently high levels of awareness people have of him around the world, while Messi has a greater proportion of people that do know of him saying they like him.”
Ronaldo’s strutting, muscle flexing style seems to prevent him from being as well-liked as Messi. 78 per cent of people said they like the Argentinian, compared with 68 per cent of people who said they liked Ronaldo.
Repucom monitors 15 markets including Argentina, Australia, India and the UK. Here’s how well known each player was in each individual country.