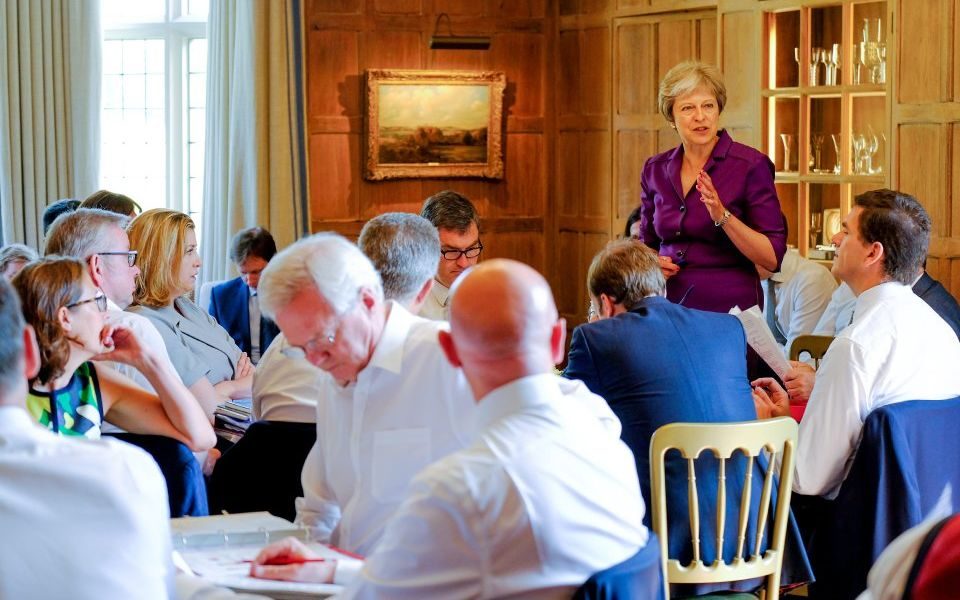 The government has agreed an official position on what it will seek from the next stage of Brexit talks with the EU, after the Prime Minister managed to win over her warring Cabinet today.

A gruelling 12-hour day of talks – and food – at the grace-and-favour mansion Chequers, white smoke has emerged on the controversial future customs relationship.

Theresa May's proposal – to create a free trade area between the UK and EU "which establishes a common rule book for industrial goods and agricultural products" – has been backed by her entire team, despite threats last night of a rebellion and possible resignation.

Although there had been concerns about the knock-on effect such a position would have on the UK's ability to strike trade deals with the likes of the US, there were enough "soothing words in there for Leavers", one source said.

May hailed the "new business-friendly" position, saying: "This maintains high standards in these areas, but we will also ensure that no new changes in the future take place without the approval of our parliament.

"As a result, we avoid friction in terms of trade, which protects jobs and livelihoods, as well as meeting our commitments in Northern Ireland."

The Prime Minister added: "We have also agreed a new business-friendly customs model with freedom to strike new trade deals around the world.

"Next week we will be publishing a white paper which will set out more details of how we will be taking back control of our money, laws and borders.

"Now we must all move at pace to negotiate our proposal with the EU to deliver the prosperous and secure future all our people deserve."

Yesterday they were described as livid – today they "just rolled over".

Among the luxurious setting of Chequers, they also discussed no deal options and how to communicate the UK's position to the world.

But it wasn't all work. The ministers got a decent spread too – the full menu of lunch and dinner is below.