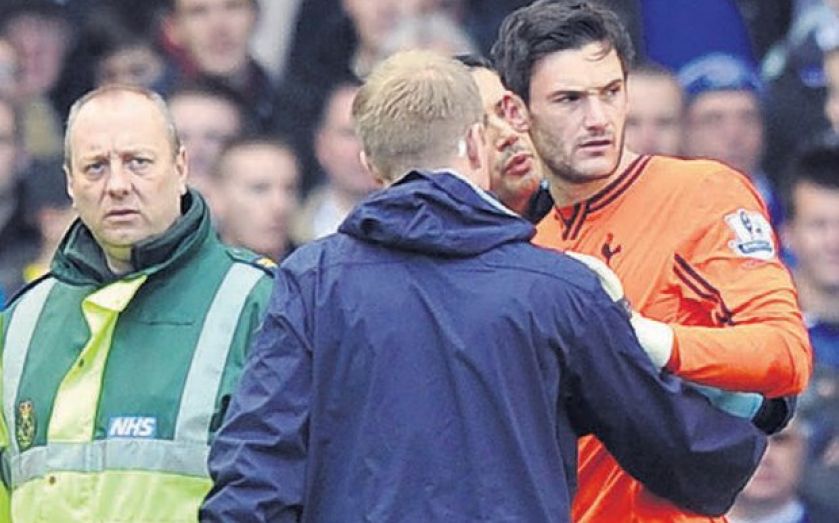 The France captain needed four minutes of treatment after a heavy second-half collision with striker Romelu Lukaku left him unconscious and substitute goalkeeper Brad Friedel was poised to enter the fray.

But as club doctor Shabaaz Mughal led Lloris off the field he swiftly turned round and ran back to his penalty area, then subsequently denied substitute Gerard Deulofeu with a smart save at close quarters to help Spurs climb into the top four.

And Villas-Boas was delighted with the attitude shown by his goalkeeper.

“He doesn’t remember it so he lost consciousness. It was a big knock but he looked composed and ready to continue,” said the Portuguese boss.

“Hugo seemed assertive and determined to continue and showed great character and personality. We decided to keep him on based on that.

“The call always belongs to me. Brad [Friedel] was ready to come in but the person Hugo is, there were enough signs for him to continue.”

Results in the Premier League on Saturday granted Spurs the opportunity to move up to second in the table had they beaten the Toffees. But after dominating the first half, the visitors failed to pose the same threat in the second period and Villas-Boas was content to take home a point.

“It was very tight, a good game,” he added. “We had good moments and a great first half with pressing and good attacking combinations and should have gone ahead in the first half.

“The second half evened itself out but we still managed to slot in a couple of situations in the second half.

“It is a good point in the end. We could have gone second but, considering Everton’s aspirations, it was important to get a point.”

Everton’s Tim Howard was certainly the busier of the two goalkeepers in the first half, being called into action to deny Sandro, Kyle Walker and Lewis Holtby’s efforts from outside the box.

The game hinged on two penalty appeals turned down by referee Kevin Friend. In the opening period Spurs defender Jan Vertonghen appeared to go down under a clumsy challenge from Seamus Coleman.

And in the second half the same two players were involved as Vertonghen pushed Coleman in the back, but again the official made the same call.

Substitute Ross Barkley fired over late on, while Steven Pienaar had a shot blocked by Michael Dawson.