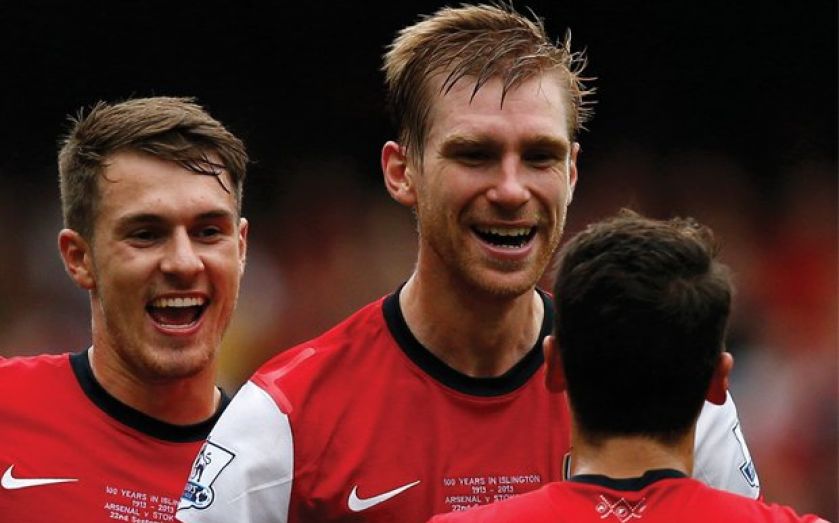 ARSENAL boss Arsene Wenger has warned his Premier League rivals that there is even more to come from Mesut Ozil, after the club’s £42.5m record signing created all three of their goals during yesterday’s win against Stoke.

The Gunners took the lead just five minutes in, when an Ozil free-kick was palmed into the path of Aaron Ramsey. And while Geoff Cameron equalised for the visitors, two more Ozil set-pieces were headed in by Per Mertesacker and Bacary Sagna to put Arsenal top of the table.

“When you look at his numbers, the assists are not a coincidence, it is just a reality of his game,” Wenger said, referring to the 24-year-old’s record of having the most league assists in Europe over the last five seasons.

“And I believe that once he is completely integrated, we will see even more of him. But he has shown today that he is a great player.”

The Frenchman expressed surprise at the nature of the win, after a second half during which Stoke had the majority of the possession.

“In the second half we looked jaded physically and lost a bit our game, and in the end we lost our technical quality,” he added. “When you play against Stoke you don’t expect to score three goals from set pieces, but it shows as well how important the delivery is.”

Just five minutes in Charlie Adam brought down Jack Wilshere in a central area 25 yards from goal, resulting in a free kick that Ozil drove low towards the bottom corner of the net. Asmir Begovic got two hands to the ball, yet the in-form Ramsey was quickest to the rebound and slotted home his seventh goal of the season.

The Gunners seemed to be in control but 20 minutes later Steven N’Zonzi dinked a cross to the far post where Marko Arnautovic volleyed against the post. The ball came back out to American midfielder Cameron who finished calmly.

The scores were only level for 10 minutes, however. Ozil curled in an inswinging corner from the right which was glanced on by Mertesacker. Laurent Koscielny rose in the middle, perhaps putting off Begovic, but the ball eluded them both and dropped inside the far post.

The game appeared to turn on its head after the hour mark as Stoke, known in recent years for their direct style, had a period of dominance. Yet the spell culminated not in a second equaliser, but with a third Arsenal goal that effectively killed the game.

The visitors’ conceded a dozen free-kicks in their own half during the match, and on 71 minutes Wilshere was again brought down. Ozil delivered an outswinging free-kick deep into the box where Sagna sent his towering header looping back across goal and into the far post.