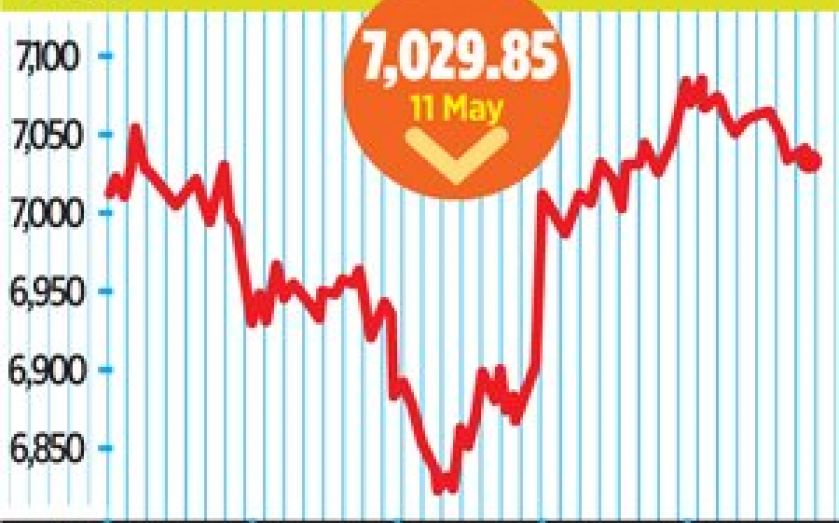 The trading day was dominated by central-bank decisions, with the Bank of England keeping interest rates on hold at 0.5 per cent and a cut in Chinese interest rates supporting commodities and mining shares.

The index stayed within touching distance of a record high of 7,122.74 points set last month.While Credit Suisse upgraded UK equities to “overweight” on the back of the election, the investment bank also warned there would be “ongoing UK uncertainty” over the Conservatives’ slim majority in parliament and the looming referendum on the UK’s membership of the European Union.

“The terms of the EU referendum are not likely to be watered down,” Credit Suisse strategists wrote in a note to clients.

Shares in Royal Mail close to four per cent after rival PostNL said it had suspended a residential post delivery service called Whistl.

Basic resources stocks BHP Billiton, Anglo American, Rio Tinto and Glencore rose up to 1.3 per cent after China cut rates for the third time in six months in a bid to lower companies’ borrowing costs and revive a sputtering economy that is headed for its worst year in a quarter of a century.

“We are seeing a knee-jerk reaction to China rate cut, but I don’t think the bounce in mining shares is sustainable,” Peter Dixon, equity strategist at Commerzbank, said.

“Ultimately what matters is the demand for metals and I can’t see how the Chinese rate cut is going to make any material difference. There has been a lot of investment to increase capacity over the past years and in many mining areas we are now struggling with over-capacities.”

Energy shares fell back, however, on Monday with the UK Oil and Gas index down 0.3 per cent, tracking a fall in crude oil prices.

Sage Group rose 2.4 per cent after Goldman Sachs raised its price target for the stock to 565p from 540p.

Aberdeen Asset Management fell 0.4 per cent after Societe Generale cut its stance on the stock to “hold” from “buy” and trimmed its target price to 485p.