Autumn Statement 2014: George Osborne tells Labour - anything you can do, I can do better 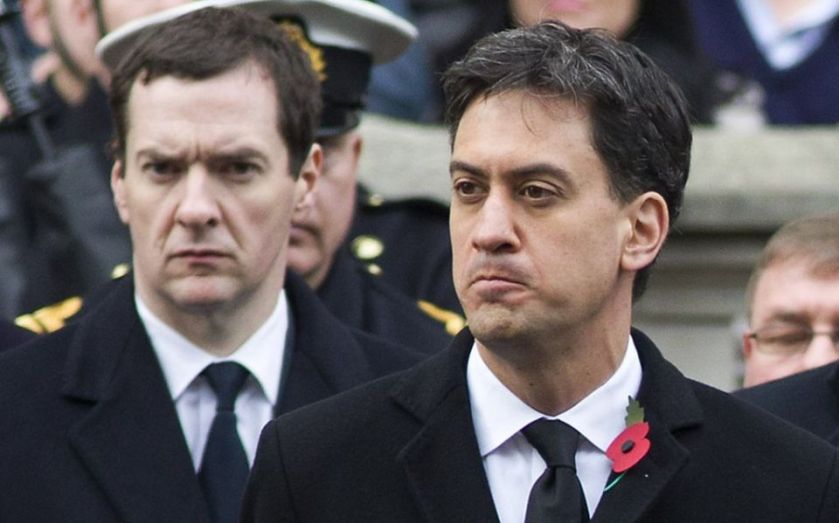 Picture the scene. A room full of Treasury policy experts, a month or so before the Autumn State­ment. The mood is tense, everyone knows the numbers aren’t as good as the chancellor hoped and the election looms menacingly on the political horizon.

Pacing up and down, a pensive look on his newly-slim face, George Osborne addresses his wonks: “OK, what has Labour been up to in the past couple of weeks? Where have they landed blows?” Tentatively, a hand goes up. “You can’t trust the Tories with the NHS keeps coming back to bite us… comes the first stuttering reply. “Mansion tax went down pretty well,” another counters, “breaking up the big banks, tax avoiders?” offers a boffin as she chews on the end of her pen. Someone draws the inevitable spider diagram, policies stretch out towards the corners of the page and Osborne, excited now, calls out: “OK, so how much do we have to spend?” The room falls silent.
This is the reason why columnists have repeatedly referred to the chancellor as a conjurer this week, preparing his scrawny rabbit for its big reveal in the House of Commons. So far this year he hasn’t delivered on his key promise to cut the deficit, and that’s a bit problematic when an election looms and some other party has nicked your fall-back plan. Ukip has been nipping at Tory heels for months, and this Autumn Statement was Osborne’s last chance to prove his mettle as the man best placed to hold the purse strings. So what do you do when another party steals your principles and gives them a snazzy new yellow and purple facelift? You nick someone else’s plan, that’s what.
Except it wasn’t the Lib Dems in the chancellor’s sights this time – he’s already leached the personal allowance and childcare vote-winners from poor Nick Clegg, who chose (perhaps wisely) to take a nice trip to Cornwall rather than watch the statement. Instead, the Treasury pilfered the logic behind some of Labour’s best headline-grabbers of the past few months and made them sound credible.
The mansion tax (people in big houses with lots of money = bad) became a stamp duty overhaul; breaking up the big bad banks became closing down a tax relief scheme to squeeze out some extra billions.
A good litmus test for a policy announcement is to ask who will pay for it. With stamp duty, it’s the government taking the hit. Make no mistake voters, this is no money-maker, this is Osborne’s best political shot across Ed Miliband’s bow. It’s the grown-up version of anything you can do, I can do better.
Taking to the dispatch box, Osborne looked nervier than usual, which is unsurprising really; repackaging your opposition’s best stuff in front of their very eyes is a brazen move indeed. He fumbled over the disappointing deficit figures and managed a couple of jokes – one playing on Miliband’s likeness to Wallace from Wallace and Gromit. It was all a bit underwhelming.
Ultimately, Osborne didn’t really need to rise to the occasion. He’s the bad cop to Cameron’s aspirational good; it’s his job to figure out the numbers, not the headlines. Labour may well be ahead in the polls, but not by much; the field is still wide open. All the Tories have to do is look convincing on the policies that cause voters to prick up their ears and persuade them that economic credibility matters. In rewriting Labour’s own policy to head them off at the pass, Osborne is as good as admitting that Miliband has a decent dog in the election fight – but it’s still too close to pick a winner.
Share
Tags: Autumn Statement 2015 George Osborne People