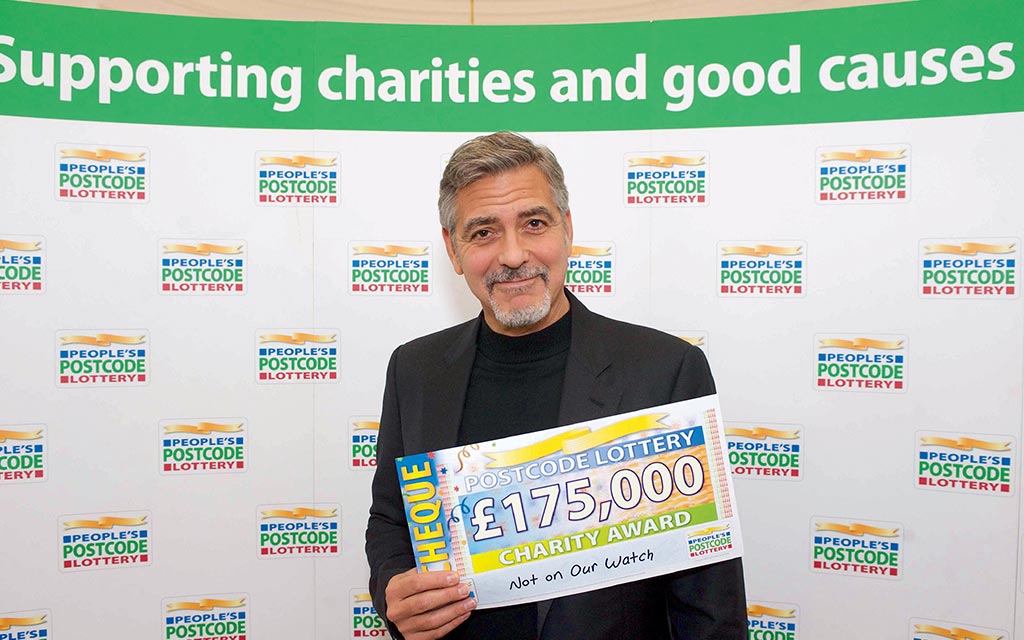 It’s not unusual for Edinburgh’s George Street to be teeming with people at this time of year. But last month, it was brought to a standstill, not by Christmas shoppers, but the most famous “George” in the world. Double Oscar-winner George Clooney (sorry, Prince George) was in town to drop into the offices of People’s Postcode Lottery (PPL), which presented him with a cheque for £175,000 for his charity Not On Our Watch, on behalf of its players.

The money was raised by players of the lottery who pay £2 a ticket to submit their postcode into a draw. If their postcode is picked, they win a prize. From each ticket sold, 55p is distributed to charities and good causes across Great Britain. These range from animal welfare organisations to charities tackling poverty in Africa; PPL players have awarded over £95m to date.

Clooney’s charity intends to spend its share on distributing humanitarian aid to vulnerable, marginalised and displaced peoples in war torn countries. Founded in 2008, Not On Our Watch was set up with fellow Hollywood stars Brad Pitt, Matt Damon and Don Cheadle. On receiving the funding, Clooney said, “Standing united as an international community, this funding will help us to increase global attention to human rights violations across the world.”

Clara Govier, head of charities at PPL, called its work “ground-breaking”, adding that the money will “provide support to countries suffering at the hands of political unrest by bringing humanitarian injustices into the spotlight.”

PPL is currently celebrating its tenth year and it proudly proclaims that, as one of the charity lotteries group, working with the Novamedia format, it’s part of the third largest private charity donor in the world. While Clooney was a highlight, it’s had many shining moments funding good causes in 2015.

One such organisation is Mary’s Meals, which has been awarded £200,000 by players of PPL to fund free, nutritious meals for children. It started in Malawi in 2002 where founder Magnus MacFarlane-Barrow met a young woman called Emma who was unable to provide for her children as she was dying from AIDS. When he asked her 14-year-old son what he hoped for in life, he replied that he would like enough food to eat and to go to school one day, so the charity aims to make that dream a reality for children across 12 countries in the developing world. This year, it fed over one million children and it hopes to use the money to expand further.

Players of PPL have also funded a project with similar goals in Great Britain, Magic Breakfast, which sets up free breakfast provision in some of the country’s most deprived communities for pupils that are often too hungry to learn. This year, it was given a cheque of £300,000 and, with each breakfast costing 22p, players have funded 1.3m breakfasts. The small team currently feeds 22,000 children in the mornings in 462 primary, secondary and special educational needs schools, and pupil referral units. The extra money raised will also allow Magic Breakfast to expand to the North of England where 35 per cent of children are eligible for free school meals.

Funding from players of PPL have also helped children in Lebanon to school by funding charity Theirworld. Founded by Sarah Brown, wife of former Prime Minister Gordon Brown over a decade ago, it aims to improve access to education and good healthcare to children around the world. The money raised by players will be used to roll-out an innovative double shift school system in the war torn region, which also means an additional 200,000 Syrian refugee children will get to go to school this year.

Another organisation that has benefitted is Sistema Scotland, which has been offering free music education to more than 1,300 children to foster in them greater confidence, teamwork and pride. They received an award of £300,000, which will help run its Big Noise orchestras in Raploch, Govanhill and Torry.

A huge funding pot of £425,000 was also handed to Riding for the Disabled Association (RDA), which uses horse and carriage riding to rehabilitate disabled adults and children. RDA chief executive Ed Bracher said the money from players of People’s Postcode Lottery will “make a massive difference. This year, for example, we’ve been able to run small, medium and major grants programmes to help as many of our 500 groups around the UK as possible.”

Players of PPL pay a monthly subscription in advance by Direct Debit, credit card, by phone or online via PayPal. There are five draws a month with prizes every day. Visit postcodelottery.co.uk or call 0808 1098765.