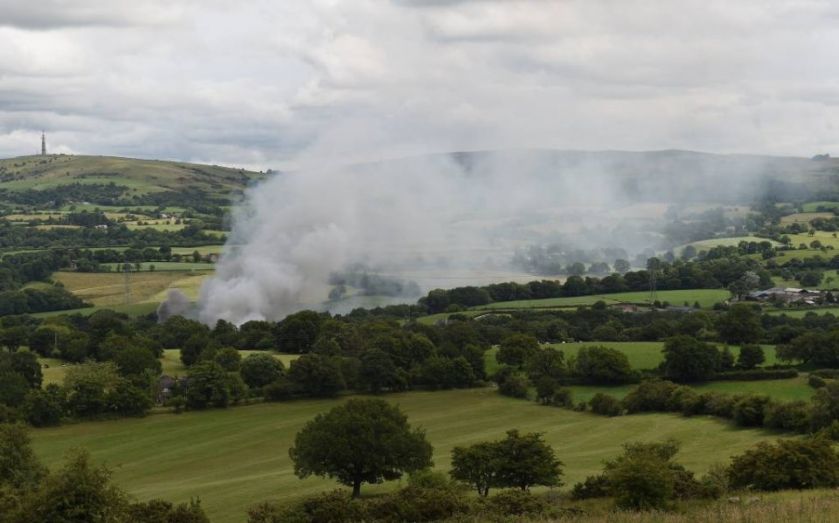 Update: Four people are still missing, several hours after an explosion caused a wood works in Cheshire to collapse.
Police have said a further two explosions have taken place at the Wood Flour Mills wood works in Bosley, Cheshire, and that four people are thought to remain trapped in the building following this morning's incident.
There have been 35 people directly affected by the blast, which occurred at 9:10am this morning: four have been treated at the scene for breathing difficulties, and a further four have been taken to hospital, one by air ambulance.
One of those injured is in a serious condition, police said.
But four people remain unaccounted for, and some 50 firefighters are still trying to tackle the blaze, near Tunstall Road, which has been shut for most of the day.
Six ambulances, two rapid response vehicles and an air ambulance are also at the site.
Cheshire Fire and Rescue Service’s chief fire officer, Paul Hancock, said: “This is a difficult and demanding incident. There are a number of hazards that make it particularly dangerous for those attempting to tackle the blaze.
"However, crews and our colleagues from the other emergency services continue to work tirelessly to both bring the fire under control and find the four that are missing. We urge everyone in the area to keep their windows and doors shut as there continues to be a lot of smoke in the area.”
https://twitter.com/cheshirepolice/status/621969488943128576
https://twitter.com/cheshirepolice/status/621998698302717952
https://twitter.com/cheshirepolice/status/622022102741295104
Cheshire Fire and Rescue said there were 15 fire engines on the scene dealing with the aftermath of two explosions. "It is believed at this stage that four people are trapped," the service said.
"The incident involves the collapse of a four storey building. There is a fully developed fire in several areas," it added. "Firefighters are facing a dangerous situation, as they cannot rule out further explosions."
North West Ambulance Service said: "We are currently assessing the scene and working closely with other members of the emergency services, with our priority being to ensure people receive the medical treatment they need as quickly as possible.
"Our primary role is to assess the level and nature of injuries, and ensure that those people most in need are treated first and taken to hospital. At this stage, it is too early for us to confirm the number of casualties."
An update at 11:30am added: "So far one patient has been taken to Royal Stoke University Hospital by land ambulance and one patient taken to Wythenshawe Hospital, Manchester, by air ambulance suffering from burns"
Cheshire Police chief inspector Paul Carroll said: “There is currently a lot of smoke emanating from the building and it is advised that residents living in the area should close their doors and windows. It is also advised to avoid the area while we deal with this incident.”
One witness said it felt as though there had been an earthquake.
https://twitter.com/ohmymayo/status/621963528883212290
The explosion has caused a huge fire, with smoke visible from miles away.
https://twitter.com/GBHelicopters/status/621991008000176128
https://twitter.com/zobby/status/621978767825707008
https://twitter.com/tgowansuk/status/621982315237867520
https://twitter.com/WillBarratt97/status/621992322708992000