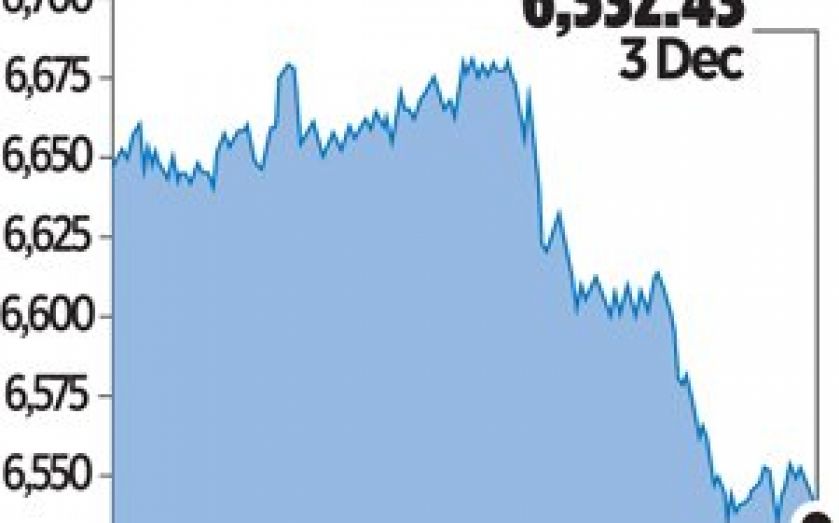 The FTSE 100 closed down 62.90 points, or one per cent, at 6,532.43 points, its sharpest one-day fall since mid-November. The blue-chip index has fallen roughly two per cent over the past month, lagging a small rise for the Stoxx Europe 600.

Resources stocks, which account for 25 per cent of the index’s weight, took off 16 points as metals prices fell. Traders pinned the decline in metals to stronger-than-expected US economic data on Monday.

Antofagasta led the fallers, down 3.4 per cent, as UBS cut its earnings forecasts for the firm by eight per cent for 2014 on concerns over the outlook for precious metals, citing an expected withdrawal of US quantitative easing as a factor.

Financials fell too as investors trimmed positions in risk assets. HSBC led banks lower, removing 6.4 points from the FTSE 100 as Nomura cut its rating on the lender to neutral, citing regulatory risk to its dividends.

A robust economy usually means better corporate profits and rising stocks. But recent improvements to the economic outlook could lead to an early reduction in the US Federal Reserve’s monthly bond-buying, which has supported the long rally in equities and curtailed returns from other assets.

“The important risk heading into 2014 is that growth will be too strong. That means we will have a revision in the timing of any interest rate hikes, which are likely to be brought forward,” said William de Vijlder, chief investment officer for strategy at BNP Paribas Investment Partners.

“For investors on a medium-term horizon, the good data is still a relief, but at the margin, investors are looking at where they can make money in the short term.”

Some sectors, notably retailers, are likely to benefit as Christmas approaches. High-street names as Next, Sports Direct and Debenhams rose as much as 2.1 per cent, reflecting expectations that sales will rise in December and into January.

Meanwhile William Hill saw its shares climb 1.9 per cent after the bookmaker was upgraded by UBS.