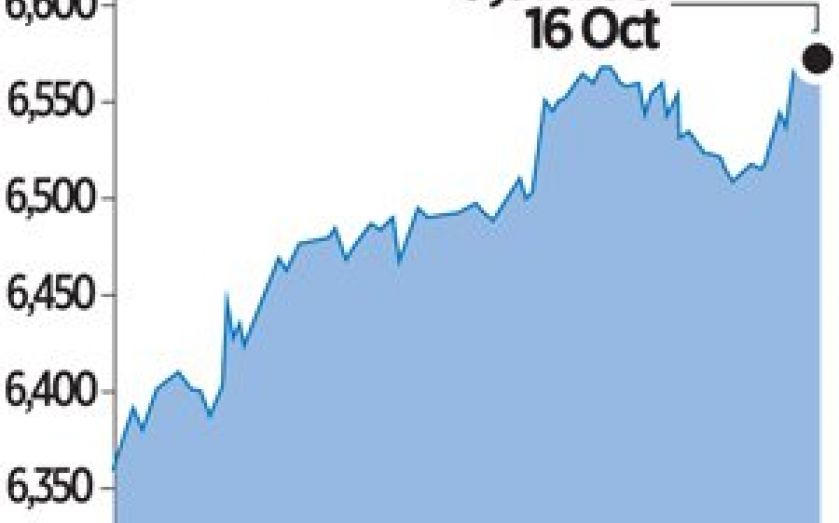 EXPECTATIONS of an imminent deal in Washington to avert a US debt default sparked a late turnaround on Britain’s top share index yesterday.

London’s blue chip index rallied off a session low of 6,504.27 to close up 22.48 points, or 0.3 per cent at 6,571.59 after a senior Senate Democrat aide said negotiations on legislation to raise the country’s debt limit and reopen government agencies were nearing completion.

“The pressing issue was the debt payments and a potential US default and that is what we seem to have averted here and that is the reason why the market has spiked,” said Richard Hunter, head of equities at Hargreaves Lansdown.

Hunter said there is potential for short-term gain in equity markets at the expense of longer-term pain with politicians merely “kicking the can down the road”, but at least if macro issues are dealt with, albeit temporarily, investors can focus on the corporate earnings season.

Consumer stocks such as Burberry and Reckitt Benckiser, however, lagged broader market gains after a handful of weak updates from major European producers.

But British investment manager Hargreaves Lansdown rallied 4.8 per cent as brokers began raising targets for the firm the day after it reported record assets under management.

Jeffries raised its target price on Hargreaves Lansdown 10 per cent to 1,150p and repeated its “buy” rating.

IMI climbed two perc ent in brisk trade after the engineer announced the sale of its beverage dispensing and merchandising business for £690m.

ITV rose 1.7 per cent, with traders citing extra anticipated advertising revenue from the World Cup in Brazil next year, after England qualified for the tournament on Tuesday night.

Heavyweight energy and financial stocks led the risers, contributing a combined 17 points to the index’s gains. Thin trading volumes, however, suggested many investors were awaiting confirmation of developments in Washington. Halfway through the month, the index has traded just over a third of the volume seen for the whole of September.