The average asking price for a house in Greater London is now £596,000.
But although this figure is huge, analysts believe that the long-term trend is for a slowing market, even in the capital.
Data from Rightmove shows prices in the capital have climbed seven per cent over the last month, and 9.6 per cent over the last year – but October is always a good month for the market and across the country the gains of 2.6 per cent represent the smallest monthly increment in six years.
In the capital’s most expensive borough, Kensington and Chelsea, prices are accelerating their decline. They fell 1.8 per cent over the 12 months to September, but 9.8 per cent over the year to October.
This map shows the annual changes. The darker the red the higher the annual change. Kensington and Chelsea is the only borough to have suffered a decrease.

To scroll past this map on mobile. swipe down on the right-hand side of the visualisation.

There is quite a gap between annual changes. Here is a chart showing the 10 boroughs that have experienced the largest gains: 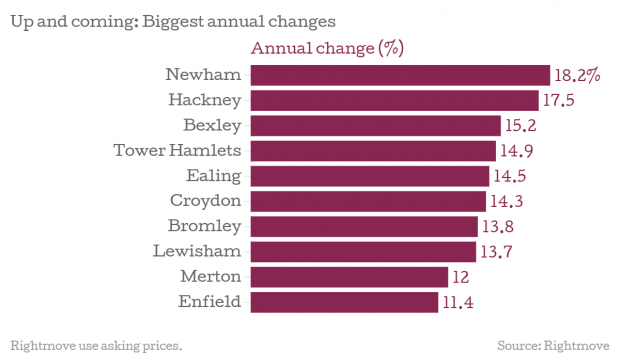 At the other end of the scale there is largely strong growth, except in the super-rich Kensington and Chelsea:

With prices still over £2m, it isn’t hard to see how demand might be tempered.
Of the 32 boroughs Rightmove collects data for (not including the City of London) there was a price disparity of over £2m between the most expensive borough, Kensington and Chelsea, and the least, Barking and Dagenham.
The average asking price nationwide is much lower than London’s at £271,669. Only one borough, Barking and Dagenham (blue on the map), has average prices below that threshold.
Here are the 10 boroughs where houses are most expensive:

And at the other end of the scale:

Rightmove’s methodology bases its average cost on asking prices, meaning the figures are often higher than those of the ONS or Land Registry.