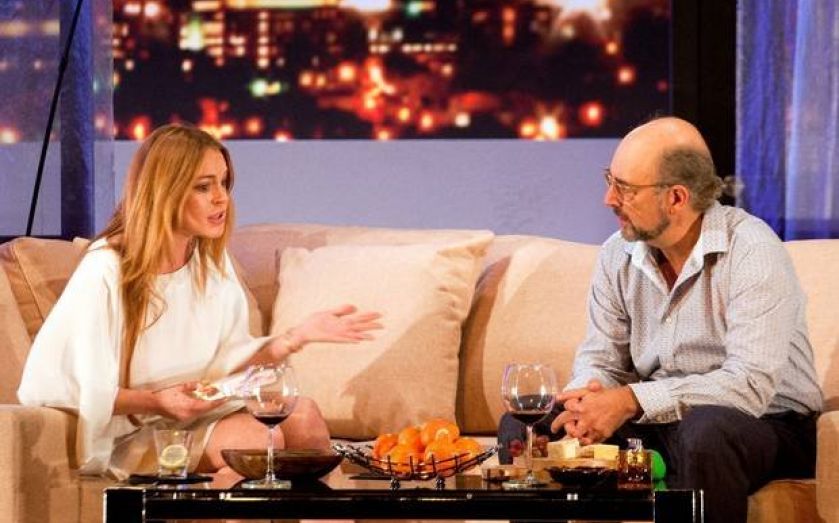 We should, perhaps, give her a little credit – but only a little. On press night, a palpable nervousness surrounded her as she entered mid-way through the first act, her lines delivered slightly ahead of tempo, as if she were desperate to get them out before they dissolved on her tongue. By the second act she’d got into her groove, giving a spirited, sweet performance that was captivating in its own way without being quite enough to convince you that you’re watching Karen the office temp as opposed to Lindsay Lohan the celebrity trainwreck.

In fairness, she doesn’t have a great deal to work with – her character is more plot device than human being, someone to bring about change in others through her two-dimensional exuberance. All the good lines go to Richard Schiff, best known as Toby Ziegler in the West Wing, and Nigel Lindsay, a stage pro who recently starred as Bolingbroke opposite David Tennant in Richard II. And there are plenty of cracking one-liners to go around in Mamet’s droll appraisal of Hollywood and humanity (case in point: “Working in movies is like the start of a love affair; it’s full of surprises and you’re always getting f****d”).

Most of the action takes place in the office of recently promoted studio executive Bobby Gould (Schiff), who has been delivered a guaranteed box-office smash (a prison buddy-movie with a Hollywood A-lister already attached) by former cohort Charlie Fox (Lindsay).

As they discuss how filthy, stinking rich this clearly abominable movie is about to make them, conversation turns to the office temp, Karen, and $500 of their newfound wealth is wagered on whether Bobby can sleep with her. His masterplan is to ask her to “courtesy read” a highfalutin novel about the end of the world, and to deliver a report on it to his LA bachelor-pad that night. Karen, however, finds a dubious spiritual connection with the text and sets about persuading Bobby to ditch Charlie’s lucrative prison movie and film the book instead, thereby committing career harakiri and perhaps saving his mortal soul.

Barring one criminally long change of set, director Lindsay Posner’s play rattles along at a fair clip, culminating in a charged, physical showdown between the three characters in which Nigel Lindsay particularly shines.

But for a play about the Hollywood machine, starring a genuine A-lister, it has a curiously hangdog air; a niggling sense that something’s missing. There’s a perfectly reasonable night of theatre to be found here, but if you’re hoping for celebrity sparkle, you may come home disappointed.

Annabelle, a creepy, possessed Victorian doll, was one of the stars of last year’s horror hit The Conjuring, despite only appearing in a handful of scenes. So it’s perhaps unsurprising that she takes centre stage in this prequel, which plays like a Buzzfeed list of fright-movie cliches. Creepy children, moving dolls, enclosed spaces, darkness, bangs, flashes, devils – bingo!

John R Leonetti’s film borrows heavily from classics like The Exorcist and Rosemary’s Baby but has none of their deftness of touch. Instead Annabelle inhabits a world where people matter of factly say things like: “Of course a demon can’t take the soul of a baby,” as if they’re discussing some immutable and obvious law of physics.

And this is the problem; everything is over-explained, often by a mystical black lady (a borderline-racist piece of casting). Part of the Annabelle doll’s sinister charm is its impassivity; that unmoving, malevolent face, but Leonetti insists on showing the evil behind the doll, which is far less frightening.

Every now and then it threatens to become a genuinely chilling experience – a scene set in a basement lift is particularly horrifying – and if you don’t jump and squeal, you have a tougher constitution than me. But that’s not the benchmark for a good horror movie – Annabelle just isn’t smart enough and doesn’t work hard enough for its scares.