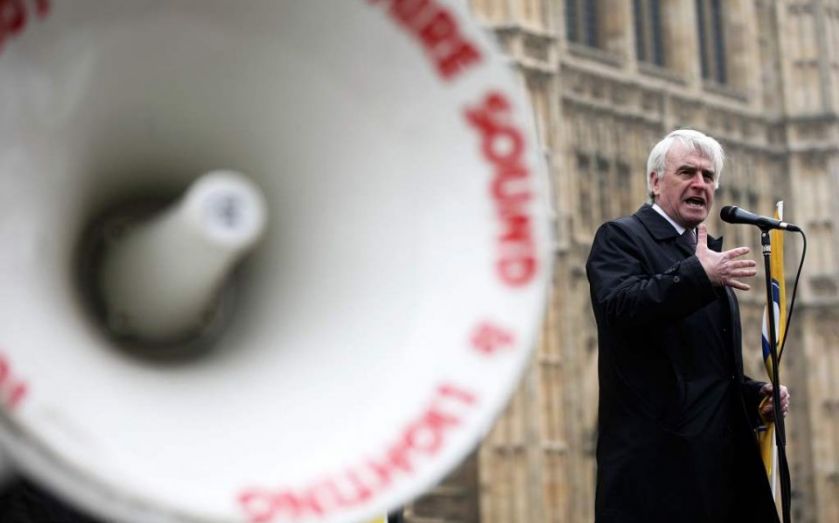 Jeremy Corbyn’s Labour party last night signalled a dramatic lurch to the left with the appointment of radical socialist John McDonnell as its new shadow chancellor.
McDonnell proposes the full public ownership of Britain’s banking system in order “to take control of our casino economy” and has described his interests as "fermenting [sic] the overthrow of capitalism".
The Hayes and Harlington MP wants a 60 per cent rate of tax on incomes over £100,000 plus an additional wealth tax on the richest 10 per cent  of Brits.
The 64-year-old recently said that a Corbyn-led government would reserve the right to renationalise privatised  assets without compensating investors.
“Let’s make it absolutely clear to any speculators in the City…that if any of these assets are sold by Osborne under their value, a future Corbyn-led Labour government will reserve the right to bring them back into public ownership with either no compensation or with any undervaluation deducted from any compensation for renationalisation,” he told the Observer newspaper in August. In 2012 he called for a so-called Robin Hood tax on financial transactions.
McDonnell stood for the leadership of the Labour Party after the departures of Tony Blair and Gordon Brown, but withdrew on both occasions after failing to secure sufficient support from colleagues. The MP sparked outrage in 2003 after praising the “bravery and sacrifice” of IRA terrorists.

John McDonnell has been appointed shadow chancellor in Corbyn's reshuffle

At an event commemorating the hunger-striker Bobby Sands, the hard-left MP said: “It’s about time we started honouring those people involved in the armed struggle. It was the bombs and bullets and sacrifice made by the likes of Bobby Sands that brought Britain to the negotiating table. The peace we have now is due to the action of the IRA.” At the time he was widely condemned by politicians from all  parties, but stood by his comments.
In 2010 he told a trades union crowd that he would like to go back in time and “assassinate [Margaret] Thatcher”. He later said the comment was a joke.
Earlier in the day shadow business secretary Chuka Umunna stepped down as Corbyn began assembling his frontbench team.
Umunna said that he and Corbyn disagreed on “a number of key points”  including the in/out referendum on Britain’s membership of the European Union. “It is my view that we should support the UK remaining a member of the EU, notwithstanding the outcome of any renegotiation by the Prime Minister, and I cannot envisage any circumstances where I would be campaigning alongside those who would argue for us to leave,” Umunna said. “Jeremy has made it clear to me that he does not wholeheartedly share this view.”
During his leadership campaign, Corbyn criticised the EU for eroding workers’ rights.
Other shadow cabinet appointments include:
• Angela Eagle, shadow business sec
• Hilary Benn, shadow foreign sec
• Lord Falconer, shadow justice sec
• Andy Burnham, shadow home sec
• Seema Malhotra, shadow chief sec to the Treasury
The reshuffle came after a string of high-profile resignations from the shadow cabinet by MPs unwilling to serve the party’s new leader.
A senior government source said last night that Labour is now “a genuine threat to our security”.
Share: