JPMorgan joins the ranks signing up to military code 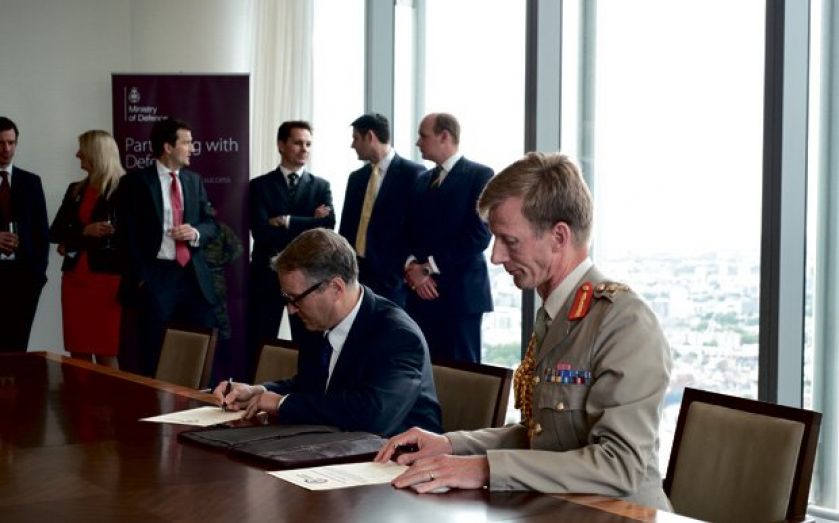 City initiatives to help ex-veterans are growing, Michael Bow finds FINANCIAL firm JP Morgan (JPM) last night became the first US investment bank to add its name to the UK Armed Forces corporate covenant, underscoring a new push by City firms to help ex-military personnel find work at a time of shrinking defence budgets in the UK. The bank joins a roster of firms like Barclays, HSBC and BNY Mellon who have signed the voluntary pledge, which has attracted around 115 signatories in London alone since it was launched two years. Last night’s ceremony at JP Morgan’s offices coincides with a week-long series of events by military organisations to help foster closer relations between the military and the City ahead of annual Armed Forces Day on 28 June. Fears over cuts to Britain’s £34bn military budget, and a steep reduction in soldier numbers, have sharpened the debate over employment opportunities for ex-military personnel in recent months. JPM, along with other City firms, has a long-running initiative to attract ex-military talent into the bank, hosting an annual internship programme for about 25 veterans to help candidates get jobs in the City after exiting the military. “The armed forces are shrinking so what you have is a lot of talented people who are looking for opportunities outside the army,” Patrick Thomson, global head of sovereign wealth funds at JPM’s fund management arm, said. “We want to make sure we’re accessing this pool of talent to not only provide them with jobs, but to also help them make the transition,” Thomson, who was in the army for five years before joining JPM in 1995, helps run the internship plan and said the bank hoped to bridge the knowledge gap for ex-soldiers seeking a career in finance. Around 70 per cent of interns go on to get a job with the bank after the programme ends. “The transition isn’t that easy because while there are a lot of skills candidates have that are applicable, such as good organisation skills, the technicalities of working in finance and the complex jargon and language takes a bit of time to learn,” he added. The pressing need to help veterans back into work was thrown into stark light yesterday by a study from Barclays, showing nearly one in ten employers look upon a past military career unfavourably. Against that tide, the Ministry of Defence has funded Supporting Britain’s Reservists and Employers, which works with City HR departments to encourage firms to support reservists. Greater London employer engagement director Niall Ahern, who tours City firms on behalf of reservists, said ex-military staff were well suited to financial careers. “Big City firms have to control budgets and hold relationships with international clients,” he said. “Someone from an officer rank, for example, might have the skillset to suit a role in that type of bank.” With a battle over military cuts looming this parliament, City initiatives like JPM’s are set to take on growing relevance to the men and women adjusting back to civilian life after their time in uniform comes to an end.