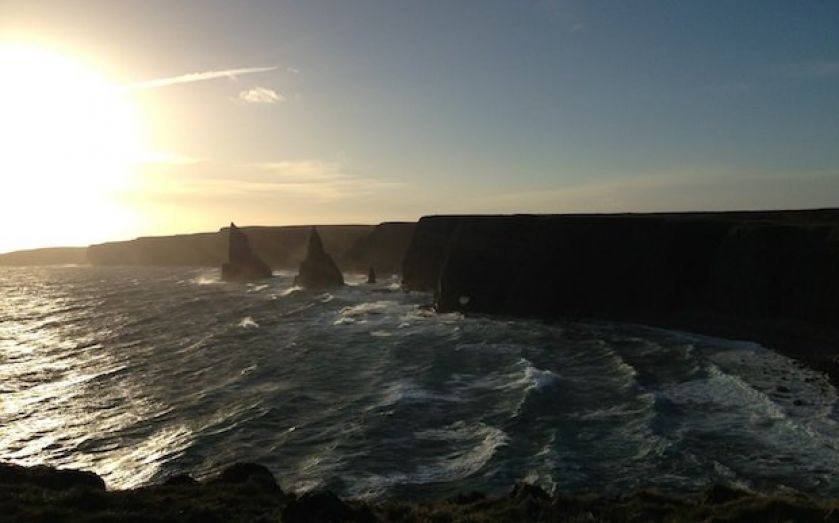 If ever there was a place where the buildings should huddle together for warmth it was here, but the roughly strewn archipelago of bungalows stand apart from each other, slightly standoffish in their brown pebbledash. John O’Groats is a strange place, twinned in everybody’s imagination with another strange place, Land’s End. I asked drinkers in the local pub whether they had ever visited their Cornish counterpart. They hadn’t. Were they curious about it? “No, not really… I hear it’s more built up than here.”

They’re right. Read any guidebook from more than two years ago, and the overriding sentiment about John O’Groats is of sympathy for the cyclists and hikers who, having hauled themselves from the tippy toe to the crown of Great Britain, find themselves, sweaty, panting, physically spent, in one of the most depressing places in the UK. In 2005, Lonely Planet dubbed it a “seedy tourist trap”, a view officially recognised by Urban Realm magazine in 2010 when they declared John O’Groats “Scotland’s most dismal town” (quite an accolade).

For the settlement at the top of the UK, Urban Realm’s damning indictment was rock bottom, the nadir from which it rose like an eco-tourism phoenix from the ashes of guidebook disdain. The following year, luxe holiday company Natural Retreats announced a £2m renovation project that would add 17 self-catering eco-friendly holiday flats. Not bad for a hamlet that previously consisted of a car-park, a dilapidated hotel and one very famous sign-post.

Built in 1875 on the site of Jan de Groote’s house, the abandoned John O’Groats hotel was to be the centre-piece of the renovation project. With white walls and a dainty turret, it had long been a fixture of John O’Groats postcards, even after falling into a state of disrepair. The renovation promised a zany, multi-coloured extension.

Initially, the 300-odd John O’Groats residents grumbled, but almost two years after Natural Retreats set up shop, many have begun to appreciate the extra business it has brought to the area. Before Natural Retreats, visitors would arrive by the bus-load, get their snap with the sign-post and clear off faster than you can say och aye the noo (you can see why: a brisk walk through the legendary First and Last gift shop is enough to scare you off for life, so oppressively does it overflow with garish Scotland-themed tat).

Previous attempts to make a tourist attraction out of John O’Groats focused on the arbitrary fact of its geographical position. Natural Retreats has made more of its status as an area of outstanding natural beauty. Who cares that it’s one of the most northerly settlements on mainland Britain? With scenery this spectacular there’s more than enough reason to visit it anyway.

A kilometre to the east lie the stacks of Duncansby, two giant twin rocks that protrude out of the sea like the tails of diving ducks. To the west there’s Dunnet head (the actual most northerly point of the mainland), and from John O’Groats itself the beautifully barren Stroma can be seen, the southernmost of the islands lying between Orkney and the mainland. And then there’s the sea. The water that rages around Stroma’s craggy coastline is the Pentland Firth, a treacherous stretch where the Atlantic plays rough and tumble with the North Sea.

With all this, it should hardly be necessary to build state of the art eco lodges to entice tourists. Still, who’s complaining? The lodges aren’t just luxurious. They also introduce a commodity rarely found in the far flung reaches of the Scottish highlands: cool. With stylish Scandinavian furniture and plenty of glass (to make the most of the beautiful bronze light), the lodges are a striking addition to a hamlet in which pebbledash and plastic double-glazing enjoy a largely unchallenged hegemony.

How did the luxury impostors ingratiate themselves with the handful of people who John O’Groats call home? With a wee dram, of course. Before they moved in, the community hub was the Sea View, a ramshackle pub whose homeliness just about makes up for its aesthetic shortcomings. Guests at the Natural Retreats lodges are encouraged to attend whiskey tasting at the Sea View where the owner has an encyclopedic knowledge of the whiskeys of the area and beyond. The locally brewed beer is almost as good. I’d recommend trying both (although perhaps not on the same night).

Comprising of the sounds “grrr” and “oats”, John O’Groats sounds like the Scottishest place on Earth and in some ways it is. It’s part of a Scotland beyond Scotland, a place above the highlands where the land ceases to be high and where nuclear power plants and call centres employ entire communities. But it isn’t, by any stretch, “Scotland’s most dismal town” – a brief walk around the surrounding countryside should convince you of that. If it doesn’t, just ask anyone who has been to Wick.