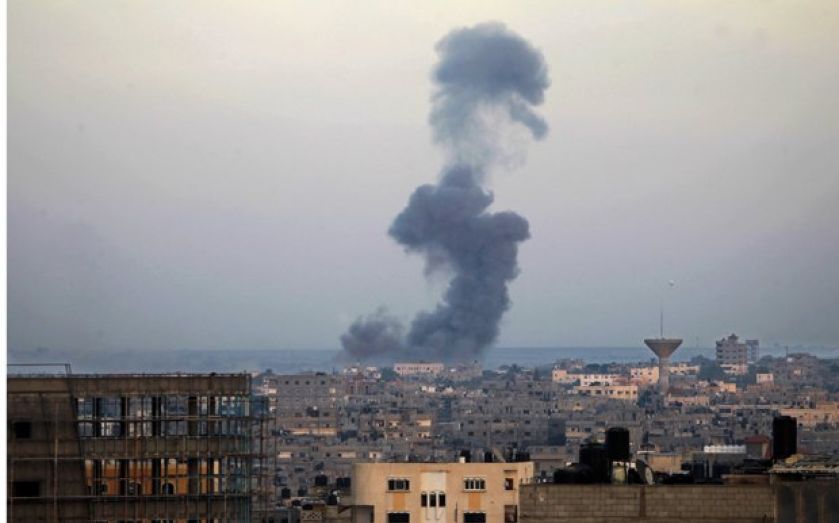 After four weeks, the guns over Gaza have been stilled, at least temporarily, as a three-day ceasefire has gone into effect. Further, the Israel Defense Forces (IDF) – satisfied that, in destroying 32 tunnels, it has significantly (if temporarily) degraded Hamas’s ability to directly strike Israel proper – has announced it is leaving the Palestinian territory. On the surface, this would seem cause for celebration; however, for anyone able to see beyond tomorrow, it is not.

This is because the dirty secret beneath the coming of an imperfect peace is that none of the major problems that led to war are about to be dealt with. There is absolutely no grand deal on the horizon for final Israeli-Palestinian status talks based on land for peace, and without such a trade, the conflict is doomed to endlessly fester.

There is precious little hope of even a medium-term interim settlement for Gaza, based on economically freeing up the hemmed-in enclave from the Israeli side of the border in return for Hamas’s demilitarisation. Given this, the best one can hope for is what Israel’s Prime Minister Netanyahu calls “Quiet for Quiet”. If Hamas stops rockets being launched from Gaza into Israel, the IDF will not respond. In effect, a tactically satisfied Israel is announcing what amounts to a unilateral ceasefire.

But by far the worst outcome of the four-week war is that both sides now have real reasons to feel they won the contest. One of the great differences the present conflict made clear is that, in recent years, Hamas – in a series of ill thought out diplomatic manoeuvres – has managed to alienate most of the more powerful states in the Arab world. From Hamas’s point of view, the war has always been primarily an opportunity to end this inter-Arab economic and political isolation. At least economically, they may realise their goals.

Nowhere is this truer than regarding Egypt, Hamas’s towering next-door neighbour. During the brief interlude in Egypt of the Morsi era – where Hamas’s ideological ally the Muslim Brotherhood dominated the country – Gaza had a wholly sympathetic and powerful friend. However, following the al-Sisi coup deposing the Brothers, and the restoration of the Mubarak-era army as the dominant political force in Egypt, in an instant the country went from being Hamas’s greatest ally to its most implacable Arab foe.

This sea-change is illustrated by Egypt clamping down just as hard as Israel on the economic lifeblood of the enclave. Al-Sisi closed 95 per cent of the tunnels connecting Egypt to Gaza, economically devastating Hamas, as over 40 per cent of its tax revenues came from tariffs on tunnel goods, amounting to a loss of around $460m a year.

Given that the prime carrot that now seems to be on the table for Hamas in the upcoming Cairo ceasefire talks is that Egypt may relax its economic stranglehold over Gaza’s economy, the four-week war can be thought of as a victory. For if the economy significantly improves, and Hamas can boast it yet again (and alone) stood up to the Israelis, its popularity within Gaza itself may well trend upwards. While its general diplomatic isolation within the Arab world is likely to persist, Hamas will have proven itself the great survivor.

For Israel, the war has also brought tactical success, even if almost all Israeli strategists concede they are merely “mowing the lawn”, degrading Hamas’s capabilities for the moment, knowing they will grow back again, and again will have to be dealt with. Within Israel, the conflict has been popular, with a poll in late July 2014 finding a whopping 87 per cent of Israeli Jews supporting its continuation. The tunnels that have allowed for incessant attacks on Israel have been neutralised for now, just as Gaza’s infrastructure itself has been badly degraded. While this is certainly less than total victory, on the whole – for the majority of Israelis – this has been a necessary and effective operation.

It is so hard for humans to accept the sober reality that sometimes chronic, heart-rending problems offer no chance of a solution for the foreseeable future, that man’s remit on this planet has decided limits. As the just concluding four-week war in Gaza makes clear, the endlessly tragic reality is that the Palestinian-Israeli conflict is one such case. With both sides convinced they have tactically triumphed, and with almost all the underlying problems that propelled the conflict along still intact, the most likely outcome of the war, is that – before too long – there will be another one to take its place.