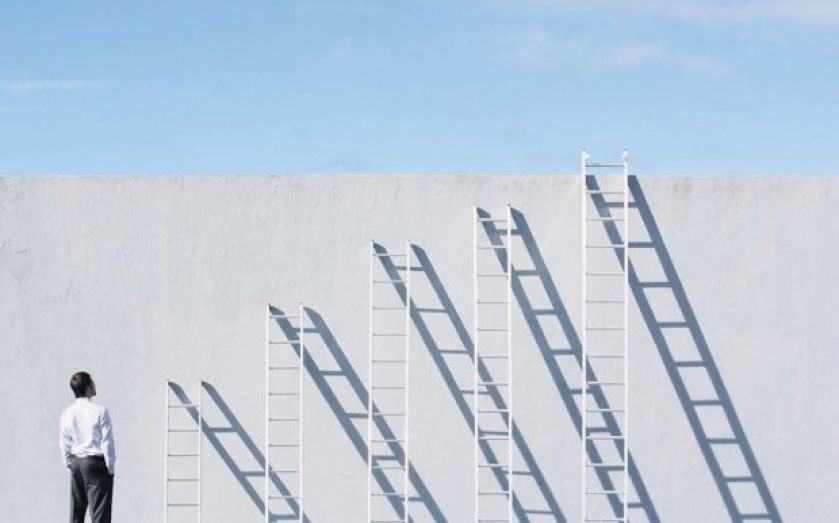 Land the job (and salary) you deserve by flaunting your skills, innovating, and socialising with your boss

YOU SHUFFLE into your office on a blustery day, fidget into your chair, and check your emails. A message from the boss catches your eye. The subject line reads, “Can you see me in five?”

His printer’s probably jammed again but you dutifully march in. He offers you a seat and says: “You’ve been here for two years and I’ve noticed you stay late most nights.

“Your printer-fixing skills in particular are exemplary. Fancy an impressive job title, a huge pay rise, and the privilege of being my new best friend?”

Sound familiar? No? Well, that’s because it’s a promotion fantasy.

Here are 10 ways people actually get promoted with advice from career experts.

1) ASK FOR A PROMOTION
This may seem blindingly obvious to the more outgoing employee but the sad truth is that some folk think instigating a tea round is putting themselves out there.

If you don’t ask, you don’t get. Make an appointment to see your boss, put your assertive trousers on, and ask for that promotion.

“One of the biggest mistakes people make when asking for a promotion is failing to prepare their case for why they deserve it and outlining what they will do in their new position,” says Sinead Bunting, head of marketing at jobsite Monster.co.uk.

“Most promotions involve a pay rise, which means it isn’t a decision your employer will take lightly.

“They need to be able to justify investing the additional capital in your talents.”

2) GROOM A SUCCESSOR
Making yourself indispensable presents an interesting conundrum. You want to be seen as an integral part of the team but you also don’t want to be so good at your job that, if you were to leave your team, it would fall apart. Pick a protégé to be your understudy; it also gives management a chance to see your leadership skills. William Knight-Hamilton, managing director of Knight Hamilton Headhunting and Recruitment, says: “It’s important to train people up to take your place otherwise people are going to be reluctant to take you out of that team.

“It’s a common trap that people fall into and it’s best avoided at all costs.”

3) DON’T BE PASSIVE
If you only get to see your boss for one hour a week, make that time count. Don’t just confirm that you’ve done what they asked and then ask what they would like done next week. Slip in how you’ve exceeded their expectations and suggest ideas. You want to convince your manager that you’re a company man (or woman) and you share the same aims and aspirations as those of the business.

4) BE SOCIABLE
Most businesses have a sports team and perhaps it’s time you joined it.

People will want to be managed by you if they think you’re a nice chap.

Make an effort to find out what your manager’s hobbies are and take an interest in their lives. Bunting says: “You’ve worked hard to create a professional image, and revealing clothes or excessive drinking can alter your co-workers’ and manager’s perception of you as a competent professional.

“Having said that, spending time with colleagues outside of work can really boost morale and help boost your network.”

5) GET NETWORKING
You might think you’re the hardest worker in the office but if a bead of sweat falls from your brow and no one is there to see it, it won’t get you very far.

New openings and opportunities may pass you by if you don’t have a strong network of allies. Go out of your way to help others and take on more responsibility wherever possible. Don’t over-work yourself but make sure you take advantage of chances to expand your skill set by asking other people what you can do to help.

6) GET NOTICED
Don’t hope you’ll climb the ranks just by not messing up your day job. Volunteer to take on extra projects, come up with fresh ideas, and even offer to write for your internal newsletter or company magazine.

Denise Taylor, founder of careers consultancy firm Amazing People and author of How to Get a Job in a Recession, says: “There are so many people who just expect to be picked out from the crowd but that’s just not going to happen.

‘“I often think, what if he’d never told me that? Would I have woken up 10 years later and still been in the same place?”

7) BE INNOVATIVE
Don’t just write for the company magazine, read it. Keep abreast of the latest developments in your industry by subscribing to the trade press or researching blogs in your spare time.

Think about what your company could do to improve its chances of survival and work with other departments to realise your ideas while expanding your network of contacts.

8) BE A POSITIVE PROBLEM-SOLVER
The British are perpetual grumblers and the office moan is often a great bonding exercise between colleagues. But if something is genuinely getting your goat, use your initiative to come up with a way to improve the situation.

Knight-Hamilton says: “It’s great to point out things in the company you think need to be improved but you also need to come up with suggestions and solutions.

“I’ve seen people lose out on promotions because they’re not positive.

“It’s not difficult to be upbeat and smiley but I’ve met some people that are just not prepared to do that.”

9) GATHER EVIDENCE OF YOUR GREATNESS
Keep a record of the profits you’ve made for the business, the clients you’ve picked up and the deals you’ve closed.

Bunting says: “If you’re after a promotion, it is really important to keep a record of all your successes and the value these bring to the company – quantifying these wherever possible.

“Compare your performance with your predecessors, colleagues and superiors and if you’re performing better than them, let your boss know about it.”

But be careful not to be negative about your colleagues because it’s important to be a team player and you don’t want any backstabbing to come back and haunt you.

10) DON’T BE A CLOCK-WATCHER
It may sound obvious but it’s worth remembering that everyone resents the guy who jumps up like he’s been burned at 5.30pm.

Earn a reliable reputation by staying half an hour later because stuff just needs to get done.

Taylor says: “Some people don’t seem to want to put in the extra effort because they’re not thinking about the long-term gain.

“You really need to show passion and willing otherwise you’ll be replaced.”