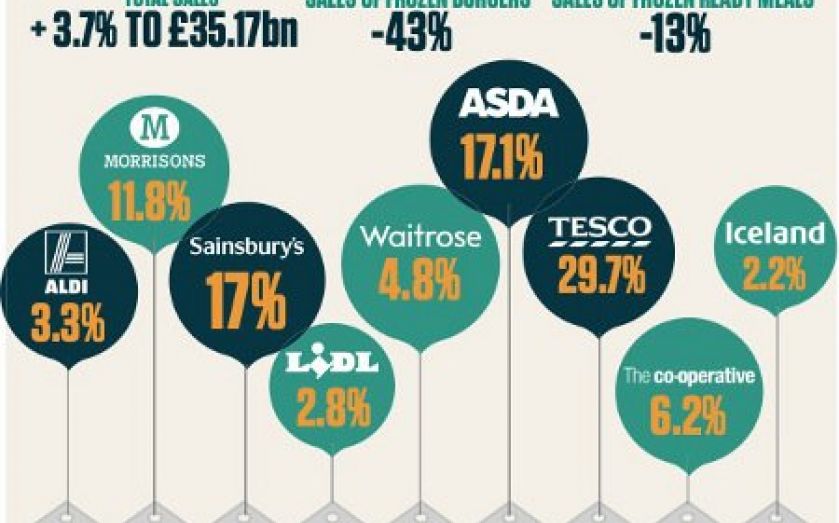 SUPERMARKET sales of frozen burgers and ready meals have plummeted since the horsemeat scandal reared its ugly head last month, industry data shows. Market researcher Kantar Worldpanel yesterday said frozen burger sales fell by 43 per cent and frozen ready meals declined by 13 per cent in the four weeks to 17 February, as retailers removed products from shelves and shoppers avoided the frozen food aisles. Kantar director Ed Garner said the horsemeat issue had only affected the products that consumers buy, rather than where they actually do their shopping. Tesco saw its market share drop from 30.1 per cent a year ago to 29.7 per cent in the period, though Garner said it would be wrong to attribute the fall to just the horsemeat fiasco. “Tesco undertook heavy promotions this time last year, where consumers received a £5 voucher when they spent £40, and not repeating this offer will have adversely affected its share,” he added. Sainsbury’s was the only one of the big four supermarkets to increase share in the period, beating the market with a 4.6 per cent growth rate. Jefferies analyst James Grzinic said Sainsbury’s has “positioned itself ideally” within the horsemeat scandal although “this may prove a fleeting benefit”. Upmarket grocer Waitrose and discounter Aldi delivered all-time record market shares this period of 4.8 per cent and 3.3 per cent respectively indicating that market polarisation is continuing. Meanwhile Britain’s fourth largest supermarket Morrisons was the only major grocer to post a sales decline. Grzinic said looking at Kantar’s figures for the past two years show “some stabilisation is under way”, however. “New marketing initiatives at Morrisons appear to be paying off as sales pressures have reduced sharply,” he said.