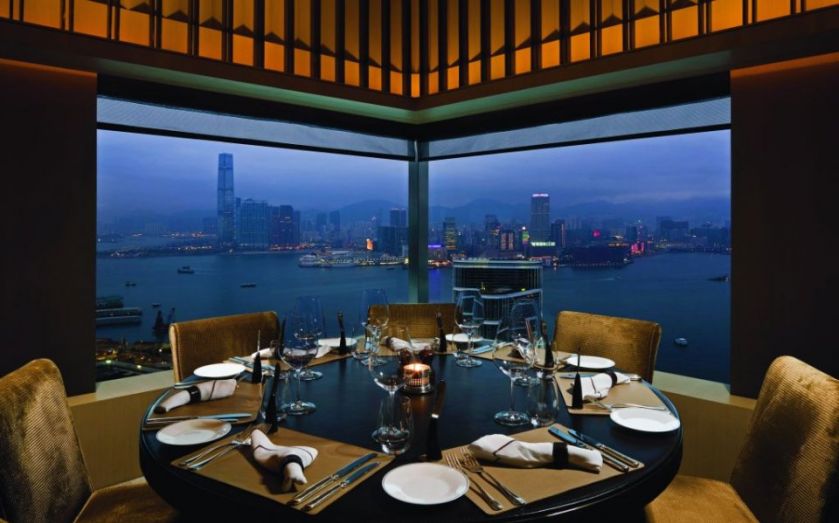 Hong Kong at night falls somewhere between Manhattan and Magaluf, combining the grandeur of the former with the trashy hedonism of the latter. I was there in September when the humidity was in the 90s and the streets were heaving with twenty-somethings moving from bar to club. It’s also home to one of the most international restaurant scenes in the world. You’re as likely to stumble across authentic Peruvian (Chicha) or North African (Kabash) or modern British (Aberdeen Street Social) cooking as you are Cantonese, the traditional local cuisine. The region’s position as the commercial gateway to the east (or west, depending on your perspective); makes restaurateurs go weak at the knees, HKD signs flashing in their eyes at the thought of all those nouveaux riche Chinese and high-flying ex-pats searching for the next hot place to spend their cash.

You’ll find four Hong Kong restaurants in last year’s S.Pellegrino top 100 list (although there aren’t any in the top 50). Western chefs like Jason Atherton have seen the potential; he now has three Hong Kong outposts, serving European dishes with an Asian twist. The first Italian restaurant outside of Italy to gain three Michelin stars is located here. A new generation of Chinese restaurateurs like Yenn Wong, Alan Lo and Paulo Pong (founders of Duddell’s) are doing the same thing in reverse, serving traditional Cantonese dishes in a western context.
As Hong Kong is relatively compact, even a short business trip or stop-over en-route to the Antipodes affords you a chance to dine at several top restaurants. Here are a selection not to be missed.

THE UPPER HOUSE HOTEL, QUEENSWAY
Hotel restaurants can be hard to swallow; too big and impersonal. Tables set in spaces that were never intended for dining, occupied by jet-lagged people who give the impression of wanting to be elsewhere. Café Gray Deluxe, though, was only a few floors above my hotel room in The Upper House, and came highly recommended. Rightly so; the packed 49th floor dining room was buzzing, the crowd young and largely local. It’s especially popular with ex-pats trying to impress visiting clients or family, and the views over the harbor usually oblige. If you book a window table at 8pm you can watch the Hong Kong light show, which is the biggest in the world according to the Guinness World Book of Records. Personally, I was too engrossed in the food to pay much attention. The menu is Mediterranean with the occasional nod to the east (e.g. prawn crackers served with steak tartare). The lobster risotto with salsify, artichoke and tarragon emulsion was stunningly good, as was the Iberico pork belly. While the menu won’t offer many surprises for your average western foodie, everything is impeccably prepared, as you’d expect from chef Gray Kunz, whose culinary career has seen him work in top kitchens from Switzerland to New York.
The Upper House is well worth considering as a base for any trip here. Located one stop from the business district (close to Admiralty station), it occupies the 38th–48th floors of Pacific Place. The views are, of course, stunning, but so are the rooms, which are a modern take on classic eastern design – deep, grey carpets, pale wood and a vast amount of space in a city where space is at a premium. Rooms from £440, upperhouse.com

SHIP STREET, WAN CHAI
British chef Jason Atherton’s first Hong Kong venture is a world away from the gaudy opulence of Berner’s Tavern or the lofty sophistication of Tower 42’s City Social. There’s a no reservations policy and, as it’s consistently packed, you’ll most likely have to leave your name at the door and head over the road to another Atherton venture, Ham & Sherry (see below). The bijou tapas restaurant – maybe 40 covers – has a European, bistro vibe. Expect to share your personal space with the elbows and knees of your fellow diners, which somehow manages to be charming rather than annoying. A central bar/kitchen occupies the lion’s share of the space, with stools lined against every possible wall. Huge windows opening onto the street prevent it from being a no-go area for claustrophobics. In this case, “tapas” doesn’t always mean “Spanish”: for every Iberico bellota, there’s a pig trotters on toast or scallop ceviche with yuzu and Chinese radish. Presentationwise it bears the Atherton stamp; all bright, clean colours and impressive plating. There’s a nice mix of haute cuisine and relaxed, modern comfort food. An excellent ham, cheese and truffle toastie topped with a quail egg sits comfortably beside exquisitely presented salt cod with chorizo, red pepper and squid ink aioli. Highlights included asparagus, duck egg and black pudding and an excellent artichoke, mushrooms and miso, with parmesan shavings. It’s something of a marvel that all of this is prepared in a kitchen the size of a broom closet. 22ships.hk

SHIP STREET, WAN CHAI
While I used Jason Atherton’s bar – as many do – as a trendy waiting room for his 22 Ships restaurant over the road, it’s worth visiting in its own right. Covered in asymmetric tiles, the walls are slightly headache-inducing, but given how crowded it gets, you probably won’t be able to see them anyway. As the name suggests, the menu offers generous helpings of both pig and fortified wine, although all the hip young things I could see were all chugging cocktails from the “Back to School” themed menu. hamandsherry.hk

D’AGUILAR STREET, CENTRAL
Located down an alley, the sky barely visible through towering buildings, Brickhouse would be about as traditional a Hong Kong bar as you could find, were it not serving food and booze from the other side of the globe. I must confess, I became more acquainted with the Margaritas at this of-the-moment Mexican bar/restaurant than I did the tacos – I went immediately after gorging myself at 22 Ships – but I’m told this is how most Hong Kongers experience it. The exposed brickwork and handpainted murals owe as much to the lofts of Manhattan as the dive-bars of Mexico City, and the result is a buzzy, pleasantly scuzzy space packed seven days a week with the city’s pretty young things. brickhouse.com.hk

BRIDGES STREET, SHEUNG WAN
This Japanese Yakitori (skewered chicken) restaurant is another of Hong Kong’s current hipster highlights, with chefs, foodies and bloggers queueing for a chance to get into the no-reservations eatery. Expect to consume every part of the chicken, from thigh and breast, to heart and cartilage of the knee (crunchy but surprisingly palatable). yardbirdrestaurant.com

DUDDELL STREET, CENTRAL
You could quite easily visit Hong Kong without eating a single Cantonese meal, but you really shouldn’t. Duddell’s restaurant and members’ club may take its design inspiration from Scandinavia but its culinary focus is steadfastly Cantonese. The two Michelin-starred kitchen serves up an a la carte menu spanning 11 pages, touching base with virtually every regional classic and delicacy. But I wasn’t interested in that; I was here for the dim sum. The dumplings are among the finest I’ve ever tasted, exquisitely crafted translucent packages served with a garnish of roe or expertly tied with a sliver of vine leaf. I asked the chef to put together a selection; nothing disappointed. The barbecue steamed buns were impossibly light and dangerously moreish, while the dumplings ranged from subtly beguiling (cod and Shanghai cabbage) to wonderfully intense (mushroom and black truffle). I got through eight steamers-worth before grudgingly capitulating. duddells.co
Cathay Pacific is offering flights from Heathrow to Hong Kong from £579 (economy) and £999 (premium economy) between 1–21 and 24– 31 May. Flights must be booked before 28 February. Fares correct at time of print.