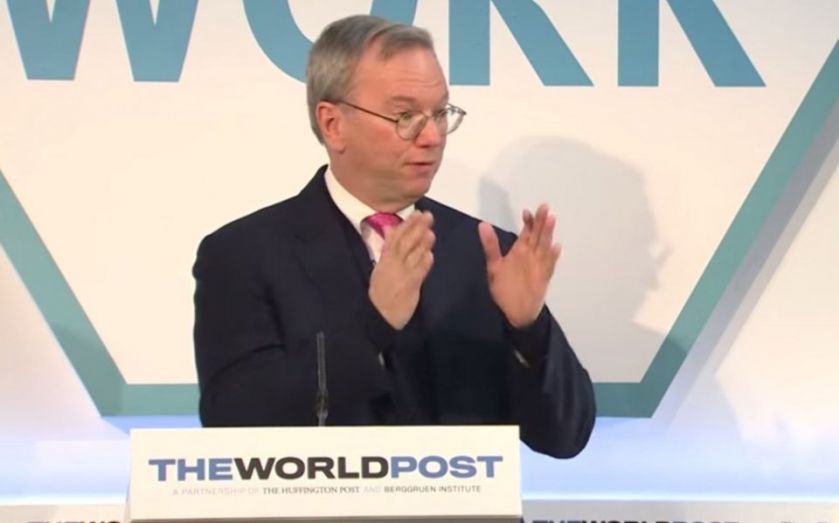 Humankind has never had it so good and we should be thankful for the role of technology in getting us to that point, according to Google’s Eric Schmidt.

Speaking at the WorldPost's Future of Work conference, the executive chairman of the software giant said he wanted to talk about “why we are so unhappy – and why we shouldn’t be”.
Schmidt rolled off a list of issues – including the rise of Islamic State, a lack of jobs and instability in Ukraine – which make us feel like “we have no cause for optimism” and, he added, “many people blame technologies for these ills”.
“What I want to do is tell you that's not right and in many cases technology is the solution and technological achievement and advancement is essential to life in the 21st century.”
Using 1915 and 1615 as examples, Schmidt painted a picture of other eras of war, sickness and terrorism, concluding that “we are much happier now”.
“Somehow we think it's different now but humans have been the same for a very long time.
“I am absolutely convinced that technology is not the problem and it may even be the solution.”
Schmidt’s positive view of where technology can take the world comes at a time when debate rages about the rise – and potential dangers – of artificial intelligence (AI).
Both Stephen Hawking and Elon Musk have warned of the possible pitfalls of the increase in use of intelligent machines in the future, with Hawking warning that the human race could be “superseded” by a more advanced form of evolution.
“AI has the promise of looking through very large sets of data and finding things humans don’t have the mental capacity to find. It’s the classic example of the needle in a haystack issue,” Schmidt said.
He used the example of Google Voice, which he said was powered by a “learning algorithm” that has progressed at such a rate that it can now correctly pronounce ‘Leicester’ – that notoriously difficult English place name for Americans to pronounce.
In a more pertinent example of the value of the translation service, he relayed a story of a Congolese woman who spoke no English who was giving birth behind the road and relied on her paramedics’ use of Google Translate to effectively communicate – and deliver her baby.
“AI made it possible for her to have a safe delivery,” he said.
Concluding, Schmidt expressed his hope for a future where technology made things better rather than worse.
“Human possibility is limitless. We can continue to be surprised by machines but, even better, we can be surprised by ourselves. And that is what I am most excited about.”