Going for gold: How the Bank of England became a battleground of the Venezuela crisis 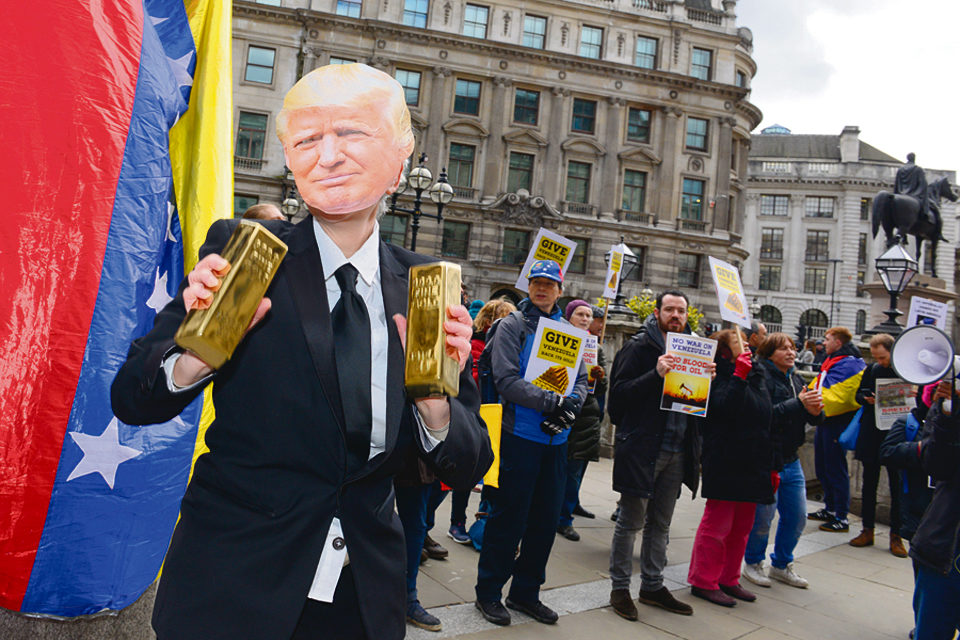 While tens of thousands of Venezuelans continued their revolt against the regime of discredited strongman Nicolas Maduro last week, a rather different form of protest popped up in the Square Mile.

A group of far-left protesters, who counted Ken Livingstone and Labour MP Chris Williamson among their ranks, accused the Bank of England of “theft” following its refusal to transfer Venezuelan gold – held in its vaults – to Maduro or his allies.

Almost 5,000 miles from Caracas, the scene was bizarre to say the least. But beyond the neo-Marxist chants and placards is a more complex story of diplomatic intrigue and a dramatic grab for gold that has placed the Old Lady of Threadneedle Street at the epicentre of a crisis that brought the world’s most oil-rich nation to its knees.

Though Venezuela has been battling an economic and political crisis for years, the saga first hit the Square Mile in early December, when it emerged two representatives of Maduro’s regime were to meet with senior Bank of England officials in a bid to claw back gold worth $550m in the Bank’s coffers.

Venezuelan finance minister Simon Zerpa, who has been sanctioned by the US Treasury over corruption fears, was due to attend the clandestine meeting alongside Calixto Ortega Sanchez, president of the country’s central bank.

Rattled by reports of the summit, and concerned about the legitimacy of Sanchez, who has not been ratified by Venezuela’s National Assembly, MP Andrew Lewer wrote to Bank of England governor Mark Carney and chancellor Philip Hammond, urging them to cancel the meeting.

But Lewer’s calls fell on deaf ears. City A.M. understands that while the Bank blocked Zerpa from attending, the meeting with Sanchez went ahead on 7 December.

A change of tack

Despite securing an audience with Bank bosses, Maduro’s representative could not convince officials to authorise the flow of gold from the Square Mile back to Caracas.

Initially, the Bank cited “operational reasons”, saying the necessary insurance and shipping arrangements could not be put in place, City A.M. understands.

The reserves would not have to be moved, and the operational concerns of the Bank of England would be avoided – or so the plan went.

Maduro’s opposition, led by National Assembly president Juan Guaido, soon caught wind of the new strategy, and feared the Bank was days away from giving the green light to a sale of the gold.

On 26 January Guaido penned a letter to Prime Minister Theresa May and governor Mark Carney, seen by City A.M., urging them to ignore any requests for a sale or transfer of Venezuela’s gold.

“There is no one with legitimate authority to act in the name of the Venezuelan Central Bank,” Guaido wrote.

“So any request to the Bank of England regarding the sale and transfer of the reserves of Venezuela should be ignored.”

The Bank stands its ground

Last week diplomatic tensions were ramped up after Jeremy Hunt said the UK had recognised Guaido as Venezuela’s interim president. Meanwhile, reports emerged that the Bank of England had blocked the transfer of gold.

Civil servants had raised concerns to the Bank, which was now citing the lack of a legitimate Venezuelan central bank president as its grounds for blocking the transfer, sources told City A.M.

The Bank has declined to comment beyond a statement that: “In all its operations, the Bank observes the highest standards of risk management and abides by all relevant legislation.

And despite the Maduro-sympathising protesters huddled on Threadneedle Street, it is unlikely the gold will be handed back to Venezuela any time soon.

Guaido has begun the process of selecting a new central bank president, who could have the authority to access the gold. However, the selection process is expected to take months, and Venezuela's broader political outlook remains mired in uncertainty and strife.

In addition to the controversy surrounding the Bank of England, City A.M. understands prominent banks in the Square Mile are reassessing their approaches to Venezuela.

In the meantime, $1.2bn of gold remains buried deep beneath the City.