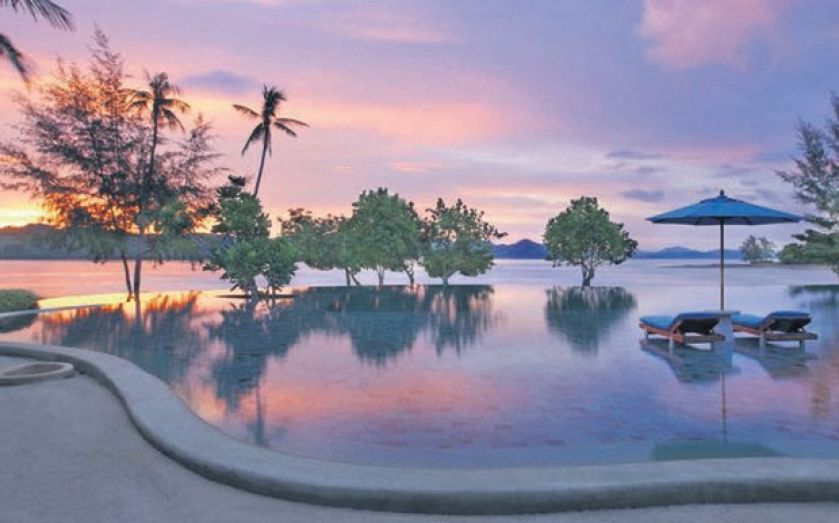 From pristine African beaches to chic European winter bolt-holes, 10 luxury island retreats that are guaranteed to get you far from the madding crowd

1. Naka Yai Island, Phuket, Thailand
luxurycollection.com/naka
Located on the southern part of Naka Yai island, just off the eastern coast of Phuket, the Luxury Collection resort has 67 villas, all with private pools. Traditionally a refuge for fishermen, with white sandy beaches and shady coconut groves, Naka Yai is surrounded by natural mangroves and landscaped gardens.
14 nights from £6,990 per room

2. Song Saa, Cambodia
songsaa.com
Song Saa Private Island resort lies in Cambodia’s Koh Rong Archipelago (the first of Cambodia’s islands to be developed) and is made up of 27 over-water, beach and jungle villas, which are spread over the two private islands of Koh Ouen and Koh Bong. It is also the first Cambodian resort to operate a speed boat tour around the archipelago.
14 nights from £7,020 per person

3. Sri Lanka
ellertonsrilanka.com
Located above the hills of Kandy, among an expansive tea plantation, the recently renovated Ellerton boutique hotel is surrounded by scenic landscape and furnished in a classic country house style. The hotel retains the character of the colonial times in which it was built, with an informal and relaxed atmosphere.
14 nights from £1,946 per person

4. Lamu Island, Kenya
heritage-eastafrica.com
Lamu Island is home to one of the oldest Swahili settlements in coastal East Africa. On your trip you will get the chance to sunbathe on one of the pristine beaches and take to the seas on a traditional Dhow boat. Cars aren’t allowed on the island, so transport is by donkey and cart.
14 nights from £1,485 per person

5. Santorini, Greece
andronis-suites.com
Santorini is one of the most popular holiday destinations in Greece, famed for its picturesque whitewashed villages and narrow cobblestone streets. The volcanic island is built on a caldera and its blue domed churches make it one of the Greek islands’ most iconic scenes. The Andronis Luxury Suites are located on a cliff edge overlooking Oia Village.
14 nights from £2,670 per person

6. Peter Island, British Virgin Islands
peterisland.com
Peter Island is a privately-owned resort in the British Virgin Islands, comprising of 52 rooms and three luxury villas. Guests can enjoy activities including private diving and snorkelling trips, water and land sports, spa treatments and walks across the island to the magnificent Sunset Loop. The island hideaway boasts five pristine white beaches, palm groves and tropical mountains across 1,800 acres – over 14 acres for every guest.
14 nights from £3,500 per person

7. Viceroy, Maldives
viceroyhotelsandresorts.com/en/maldives
Located in the privacy of the Shaviyani Atoll, Viceroy Maldives lies at the northern edge of the island mass, comprising over 17 acres of palm trees encircling a lagoon. Five dining venues offer everything from casual beachside cuisine to intimate fine dining.
14 nights from £5,600 per person

8. Isla de Mujeres, Mexico
southamericanexplorations.com
Just off the coast of Mexico – a 20-minute ferry ride across the Caribbean from Cancun – lies Isla Mujeres, a tiny coral outcrop that is one of Mexico’s hidden treasures. With a short journey time, clear blue waters and some of the most beautiful beaches in the world, Isla makes a perfect, hassle-free island getaway.
14 nights from £3,790 per person

9. Vamizi Island, Mozambique
vamizi.com
Vamizi Island nestles within the Quirimbas Archipelago, a string of islands along the length of Mozambique’s remote Northern Coast, offering the run of your own private island.  Just 12 kilometres long and one kilometre wide, Vamizi, fringed with gently-shelving beaches and calm waters, is a haven for adults and children alike.
14 nights from £9,205 per person

10. Hell Bay, Scillies
hellbay.co.uk
Hell Bay, on the smallest island in the Scillies, has a sub-tropical climate thanks to the Gulf Stream and enjoys white sandy beaches and palm trees. It has just 25 suites, which are decorated in a sophisticated New England style and boast uninterrupted views towards the Bishop Rock lighthouse and out over the sea. It’s great for fishing and food foraging trips.
14 nights from £1795.50 per person